A Canton Township resident was injured when a kitchen fire destroyed his apartment at a four-unit complex on Orchard Drive on Monday, May 20. 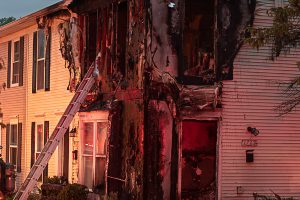 Canton Fire Department Deputy Director Chris Stoecklein said a total of 12 firefighters and eight fire units responded to the blaze within 7-minutes of the first alarm, which came in at 7:59 p.m. The firefighters were able to contain the inferno to one of the four units.

According to Stoecklein, one apartment is a total loss and the remaining apartments in the four-unit building sustained heavy smoke and water damage. Stoecklein estimated the damage of the one unit at more than $200,000.

Stoecklein said it took 25 minutes to get the fire under control. While the fire is still under investigation it is believed it stated as a cooking fire in the kitchen, he said.

The injured resident is listed in stable condition in a local hospital suffering from non-life threatening injuries.