As President George H.W. Bush was honored on the occasion of his state funeral in Washington last Wednesday and remembered for his lifelong accomplishments, leadership and commitment to public service, many in Plymouth will never forget the sudden wave of keen emotion and excitement that came with meeting the first family up-close, 26-years ago.

In the summer of 1992 President Bush and first lady Barbara Bush visited Michigan. The Bush campaign people that chartered the train for his re-election campaign scheduled whistle-stops in Plymouth, Wixom, Holly and Grand Blanc, and Plymouth was the first stop.

By this time in 1992 passenger train travel was obsolete and business people, including presidents and presidential candidates were spending more time in the air than on the rails. Bush broke with the new tradition. Railroads had a special meaning and significance for the 41st U.S. President.

The President’s train tour started in Ohio on Friday, Sept. 25, first stopping in Columbus, the birthplace of his father and on to Marysville, the home of his wife Barbara, then on to Arlington, Findlay and Bowling Green.

The next day, on a pleasant September afternoon, the long 21-car Union Pacific passenger train sporting two new CSX Transportation’s locomotives, decked out with a patriotic red, white, blue and yellow scheme, having two American flags flying on its flanks with number “1992,” on the lead engine, pulled into the Plymouth railroad station, between Starkweather and Mill, with full pomp and fanfare.

For hours before, the Secret Service had ordered the area near the old Chesapeake and Ohio station closed. The streets surrounding the railroad crossing were sealed-off by local police agencies for one-square mile, starting at daylight.

During the week before the arrival of Bush’s presidential train, CSX crews readied and cleaned the area, inspected and painted the Starkweather and Mill Street crossing gates, switches and area storage buildings with fresh coat of silver paint. Grandstands were erected on the station’s plaza. Red white and blue bunting stretched across the alleyway that connects Mill with Starkweather. Banners that stretched overhead read, “Plymouth Michigan Salutes the Spirit of America and “Agenda for America-Bush-Quale 1992.” At the same time, FBI and Secret Service personnel were meeting with local and state police officials setting up security checkpoints and mapping out Old Village.

It was not until late afternoon Saturday, after the FBI and security had concluded their extensive screening process for the thousands of spectators that the gates were opened to allow people near the station. The number of people permitted in the immediate area was restricted for security.

As the slow moving train came to a halt, Bush stepped out on the rear platform of a last car “Baltimore,” one reserved by the railroad for Presidents, with his sleeves rolled-up he waved to the fans that had spent hours waiting. The adoring fans were shouting, “Four more years.”

One eager fan that day was the notable 99-year-old Norma Mariah Baker Cassady, a life-long Plymouth resident, first curator of the Plymouth Historical Museum and descendant of Henry W. Baker, first president of the famous and enormously successful Plymouth manufacturing enterprise, the Daisy Air Rifle Company, at the turn of the twentieth century.

It was 1912 when Cassady, then 19, first came to the same railroad crossing and train station to see former Republican President Theodore “Teddy” Roosevelt on the day when his Presidential train stopped in Plymouth during a whistle-stop campaign before heading to Saginaw. Roosevelt was the 1912 Presidential candidate for the newly formed Bull Moose Party.

In her last year and in failing health Cassady was wheel chair bound, bright, alert and cheerful on her important mission. She very much wanted to meet the first family and to say her final goodbye.  Her good friend Creon Smith, proprietor of the former downtown Plymouth landmark, the Mayflower Hotel, accompanied Cassady. She carried with her an autographed black and white photo of the President and Mrs. Bush and a bouquet of flowers.

On Thursday afternoon this week the remains of former President Bush was taken out of St. Martin’s Episcopal Church in Houston, Texas and loaded on a special funeral train in route to the George H.W. Bush Presidential Library in College Station where he was laid to rest with the former first lady and their late daughter Robin.

Engine “4141,” a rare locomotive that was commissioned to honor the former president in 2005, pulled the long string of Union Pacific passenger cars, just like those that arrived in Plymouth in 1992. The engine is one of only a few of Union Pacific diesels to bear a color scheme other than the company’s traditional gray and yellow: It was painted to resemble Air Force One.

As the band played “Hail to the Chief,” the window drapes were removed from the train car windows so the thousands of onlookers waiting along the tracks in the rain would have a clear view of flag draped casket as they said their final goodbyes.

Bush and Roosevelt are now history, as are most passenger trains. Cassady having met two revered U.S. Presidents and lived a full and storied life, died the next year at age 100.

Northville School board lashes back 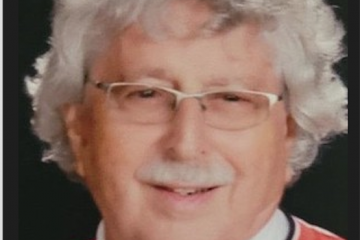