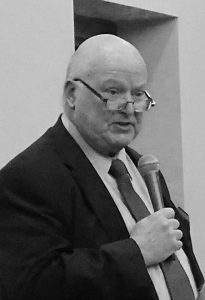 Don Soenen watched the For Sale sign go up at 10-acres of recreational fields owned by the Plymouth Arts and Recreation Complex (PARC) a few months ago with some regret. Now, Soenen, who serves as PARC president, will happily watch the sign come down as the property is no longer on the market.

Benefactors of the arts complex have come forward and pledged the necessary funding to make the needed improvements at the 100-year old building, conditional on the retaining of the recreational fields by the arts complex, Soenen said.

Last week, following the pledges, members of the board of directors of the 501 c 3 non-profit were happy to reveal plans for major capital improvements during the next 3 to 4 years to help ensure the building remains a valued asset for the Plymouth community.

According to officials, the hallways on all three floors of the former Central Middle School will have new ceiling tiles, new LED lighting, new paint on the walls and lockers, and refurbished flooring including the original terrazzo floors, along with already installed new directory and wayfinding signs. Exterior doors have already been replaced where needed, and all have been re-painted, according to a spokesperson.

In addition, broken and uneven cement leading to the front entrance has been replaced and next year, officials said, the first priority will be the much-needed re-paving of the parking lot. Other projects that will be phased in during the next few years include: re-installing full-size windows consistent with the original appearance of the building and some major upgrades to the pool area, locker rooms, and theater. All the rest rooms will also be refurbished, officials said.

All the improvements will be funded by an as-yet unidentified group of residents and foundations which recently banded together to make charitable pledges to PARC on the condition that the complex would abandon the sale of the recreational fields.

When members of the board realized that enough pledges had been received to fund the necessary improvements to the historic school building, they enthusiastically agreed to the condition and agreed to cancel the sale of the 10- acres of green space despite the significant financial offers from several qualified developers, a source noted.

“When the millage vote failed and no major private donations emerged, we reluctantly decided to sell the ‘excess land’. Not because we wanted to; because at that point we had to, as the building is not long-term viable without sufficient funding to make necessary repairs and improvements. Those who have now stepped forward to allow us to retain the 10 acres of recreational and green space have done PARC and Plymouth a great favor for which we should all be grateful,” the board members noted in a prepared statement.

“The private donors who made this possible will be appropriately recognized via naming rights as their multi-year charitable donations turn into completed projects,” the statement continued.

In addition to securing these funds for major capital improvements, PARC – like all non-profit organizations-will continue to face the ongoing challenge of balancing the annual operating budget. This year, the facility has been bolstered by a record facility utilization which has led to a 15 percent increase in revenue over 2018, combined with the recurring, needed annual charitable donations to PARC by foundations and residents, including the $100 public campaign initiated this year, Soenen said.

“No other community that we are aware of in the region, or any-where in Michigan, can boast this breadth and depth of quality arts, education, and recreation organizations in one central location, helping sustain these mostly non- profit organizations and providing outstanding quality-of-life opportunities for residents of all ages,” the board statement concluded.

PARC to close until further notice