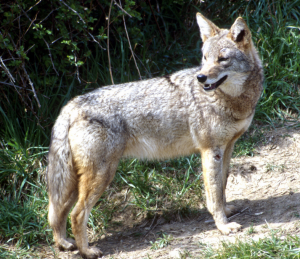 According to Michigan’s Department of Natural Resources, coyotes have migrated into urban and suburban areas throughout the state. Coyotes are most likely to be spotted during their breeding period, which occurs in Michigan from mid-January into March. Coyotes are active day and night, however peak activity usually occurs at sunrise and sunset.

Coyotes can be difficult to distinguish from a medium-sized German shepherd dog from a distance. The size and weight of coyotes are commonly overestimated because of their long fur masking a bone structure that is slightly smaller than most domestic dogs. When running, coyotes carry their tail below the level of their backs.

In urban areas coyotes are attracted to garbage, garden vegetables and optional pet foods. Coyotes are opportunistic, and will prey on unattended small dogs and cats. However, because coyotes are known to have an instinctive fear of people, coyotes rarely attack humans.

To minimizing a potential conflict with a coyote:

“Because we share the community with wild animals, a coyote sighting should not automatically be considered a cause for concern,” said Canton Police Community Relations Officer Patty Esselink.

“If residents feel they are in danger of a coyote, or if they observe a coyote in obvious distress they should contact the police department, otherwise residents are encouraged to follow the tips provided to minimize interaction with wildlife.”

Reports of a coyote in distress or causing a threat can be called in to Public Safety’s non-emergency line at 734/394-5400.

Emergency situations should always be called in through 9-1-1.  Residents with nuisance wildlife issues are advised to contact Varmint Police, a private wildlife management company, at 734/729-0858 or at www.varmintpolice.com.