Last week the Republican-controlled Michigan Senate voted to send a $2.5 billion tax cut proposal to Gov. Gretchen Whitmer’s desk. With billions of dollars in surplus funds GOP lawmakers in the House and Senate pushed to drop the state’s income tax from 4.25 to 3.9 percent, increase tax deductions for seniors and allow parents to claim $500 credits for each of their dependents. The tax cut bill passed the Senate in a 22-15 vote with all of the Democrats in attendance opposing it, a sign of Whitmer’s opposition.

According to the Detroit News, Whitmer expressed concerns about the bill to state legislative leaders after the vote and called on Republicans and Democrats to come together to negotiate a comprise, claiming the bill “unsustainable” and “fiscally irresponsible.” Groups that support Whitmer reportedly called on her to veto the bill.

“Unfortunately, Gov. Whitmer has indicated that she is likely to veto these bills once they reach her desk…The governor claims the tax cuts are not sustainable, yet she is proposing a budget that is 25 percent higher than it was before the pandemic,” said James Hohman director of fiscal policy at the Mackinac Center for Public Policy in a statement.

Whitmer and lawmakers have until Oct. 1, the start of the next fiscal year, to approve a new budget. The governor has proposed a $74 billion spending plan for next year, targeting relief for seniors and low-income workers, according the news article.

Growing revenue along with federal Covid-19 relief funds have fueled budget surpluses throughout states across the nation.

At least 13-states are considering income-tax cuts this year according to The Tax Foundation, a Washington D.C. based think tank that collects data and publishes research studies on U.S. tax policies. Last year 16 states enacted or implemented income tax cuts-reportedly the largest in decades.

Revenue for all 50 states collectively grew 14.5 percent in fiscal 2021, according to the National Association of State Budget Officers. The Tax Foundation Group reports tax cut proposals are coming from states with both Republican and Democratic leaders.

According to the Wall Street Journal, state lawmakers and governors, many of whom are up for re-election are pointing to the improving revenue statistics and rising inflation in their calls for tax relief.

The incumbent Democratic Gov. Whitmer is running for re-election to a second term in the November gubernatorial election. 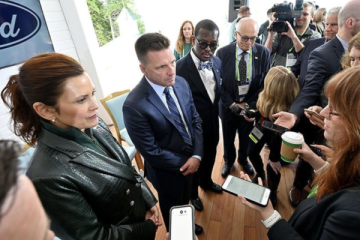