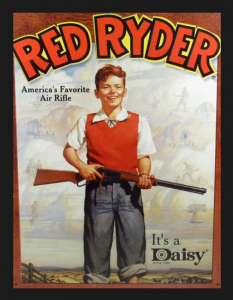 Christmas wouldn’t be the same without viewing the 1983 film, A Christmas Story, the enduring classic that features the famed Red Rider-Daisy BB gun-born here in Plymouth in 1888.

Founded in 1882, the Plymouth Iron Windmill Company provided air guns with the purchase of windmills to attract customers. Later as popularity and demand increased they elected to manufacturer the air guns in place of windmills. By the 1930’s they gained international fame with their marketing of very popular all metal BB gun. The gun received its name from then general manager, later to become president of the new Daisy Manufacturing Company, Lewis Cash Hough. The first time Hough fired the lever-action prototype rifle he exclaimed, “Boy…It’s a Daisy.” 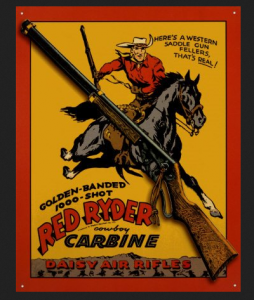 “I want a Red Ryder Carbine Action 200-shot Range Model air rifle with a compass in the stock and “this thing which tells time” Ralphie told Santa.

You’ll shoot your eye out!

Don’t you shoot your eye out. We’ll be here for you in 2017, with more of the same unbiased news stories, events and politics –The Real Story– for the Plymouth, Canton and Northville community.

Merry Christmas from all of us at PlymouthVoice.com

May your New Year be filled with happiness.