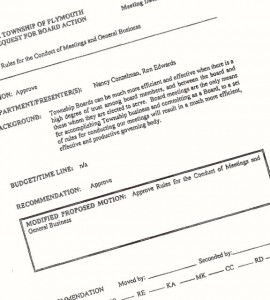 For the second time in less than a week, angry residents filled almost every seat in Plymouth Township Hall Monday evening in anticipation of a vote by board trustees changing the rules of meeting conduct that, many said, would stifle the voice of the public.

Many attendees were residents of the township park area where a controversial amphitheater is being built. Others, from several township subdivisions, were angered by recent media reports about flagrant spending by the board on recreation projects. Three pages of proposed “rules for the conduct of meetings and general business,” were drafted by Township Treasurer Ron Edwards and Township Clerk Nancy Conzelman after they said, “The board’s meetings are getting to be uncontrollable” defending their proposed new rules of conduct as an attempt to “calm this down.”

The five-hour meeting started at 6 p.m. After 15 minutes board members left the room for three hours to conduct their closed session meeting leaving the approximately 100 residents in attendance to wait.

At 8:30 p.m. impatient residents, inspired by former Plymouth Township Deputy Clerk Sandra Groth, decided to conduct their own inner-meeting. One-by-one, attendees introduced themselves and expressed their candid feelings and disapproval about what they called mismanagement and lack of transparency in the current township hall administration. The audience included media personnel, attorneys and Roland Thomas, former Plymouth-Canton school board president.

Groth who worked for Plymouth Township for 16 years was concise in her criticism of Edwards.

“Why is the treasurer involved in the decisions about the golf course, the level of service provided by the fire department, the activities in the park, the fireworks and the picnic, which streets are plowed by the DPW, which employees get raises, and now the rules of conduct for the meetings?” she demanded.

When board members returned to public session at 9:15 p.m., Township Supervisor Richard Reaume, upset by audience members shouting comments, stood up, ripped off his microphone and stormed across the hall to the police department to summon Lt. Robert Antel to come and sit in the hall.

Board members reviewed two of the four sections listed on a draft published with the board meeting packet by the end of the meeting. No vote on the new rules of conduct was taken.