“The third Wave proposal is a good one if the group can come up with the  money and Plymouth Township settles its court dispute over ownership.”

If Plymouth Township  Supervisor Richard Reaume has his way, the 323-acre parcel of vacant farmland on Five Mile Road west of Ridge Road could be the site for a new township recreation complex.

According information contained in a recent report by Crain’s Detroit Business, Reaume is moving forward with plans to sell and develop the former prison property, the subject of a lawsuit filed against Plymouth Township and Wayne County by the City of Detroit. Attorneys for Detroit claim 190-acres of the property still belongs to the city and that the parcel was erroneously sold to the township as part of a 2011 Wayne County tax foreclosure sale. The township paid $606,000 for the land, on the tax rolls at one time for more than $15 million.

Township attorneys have filed a countersuit against the City of Detroit, claiming that because the city did not protest the tax notices and subsequent sale at the time of the occurrence, they no longer have a right to the land or any financial remuneration.

Reaume met with Chinese real estate development firm Third Wave Group this month and discussed the proposed development during a three-day Detroit conference after launching an advertising campaign for the entire 323-acre prison farm property, located west of Ridge Road. A newspaper advertisement placed recently by the township stated the township was seeking prospective developers and offers of an acquisition proposal.

Third Wave was one of four respondents to their advertisement. Others respondents were Southfield-based Redico LLC, and Birmingham-based Biltmore Development LLC and Total Sports of Wixom. Last year Redico purchased Plymouth Township property on the Northeast corner of Five Mile and Beck Road in Northville Township. According the to the Crain’s report, the Chinese firm Third Wave began talks with Plymouth Township in December with plans to begin architecture and engineering by July.

“The Third Wave proposal is a good one if the group can come up with the money and Plymouth Township settles its court dispute over ownership,” Reaume said. 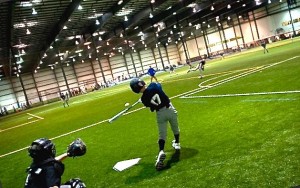 The Total Sports’ proposal is to build a sports complex with indoor and outdoor facilities such as softball and basketball.

The township board, led by Treasurer Ron Edwards, voted down an opportunity to work with supporters of the proposed Plymouth Arts and Recreation Complex (PARC) to be located at the site of Central Middle School in downtown Plymouth and rejected a request to join a feasibility study for the community center plan. Board members also voted to abstain from any joint agreements with the City of Plymouth on any project for three years.

According to their website, Total Sports is the largest youth and adult team sports venue with facilities totaling more than 400,000 square feet. More than one million visitors use the facility annually which offers youth and adult leagues, as well as clinics and camps for soccer, lacrosse, baseball, softball and roller hockey,

The land is currently zoned for industrial, manufacturing or scientific research.

Reaume indicated he is willing to work with “whoever comes through with the right proposal.”

“We’re asking for some cooperation from Detroit, but they are suing everyone,” Reaume said.

Reaume is quoted as saying the township still claims ownership of the land and the city “…wants $60 million for the property.”

Art in the Park returns for its 35th year