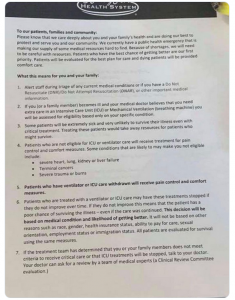 Ghoulish questions of ethics regarding rationing care for the elderly ring loudly; how does a patient qualify for a ventilator, and how old is “too old.”

“In a worst-case scenario, doctors in overwhelmed hospitals may have to decide who gets life-saving support based on each patient’s ‘likelihood of getting better,’ according to a letter from Henry Ford Health System.” …

Henry Ford Health System officials have decided on a triage plan that would decide who received full care based on age, health status and the severity of the illness-the rest would be simply given “comfort care.”

A draft of a planned policy letter at Henry Ford Health System, intercepted by Bridge Magazine, suggests the worst of COVID-19 is yet to come — and doctors will have to ration life-saving care and decide who is sick enough to receive a ventilator.

“Some patients will be extremely sick and very unlikely to survive their illness even with critical treatment,” reads the document, which circulated on social media Thursday.

“Treating these patients would take away resources for patients who might survive,” it continued.

The document, which was addressed to patients and their families but not sent to them, instructed providers that some patients, such as those with severe heart, lung, kidney and liver failure, terminal cancers or severe brain trauma and burns may not be eligible for ventilator or intensive care, but “will receive treatment for pain control and comfort measures.”

Limiting treatment for the old or chronically ill may violate civil-rights law.

The Age Discrimination Act of 1975 prohibits “discrimination on the basis of age in programs or activities receiving Federal financial assistance.” The ban covers all activities of recipient institutions, such as hospitals. Likewise, the Rehabilitation Act of 1973 as bluntly forbids excluding an “individual with a disability” from any service by a federally funded entity.

Henry Ford spokeswoman Brenda Craig said the letter “is part of a larger policy document developed for an absolute worst-case scenario,” rather than “an active policy.”

The University of Michigan in Ann Arbor was caring for at least 57 COVID-19 positive patients in its hospital. Spokeswoman Mary Masson noted that staff must use the same personal protective equipment around other patients whose test results are pending, adding: “We’ve got what we need to care for our current patients and the capacity to care for more.”

Henry Ford Health System also released a statement from Chief Clinical Officer Dr. Adnan Munkarah late Thursday in response to Bridge questions about the letter, which described it as “deeply patient focused, intended to be honoring to patients and families.”

“With a pandemic of this nature, health systems must be prepared for a worst case scenario,” the statement read.

The system had gathered “collective wisdom from across our industry” to guide difficult patient decisions “during an unprecedented emergency.”

“It is our hope we never have to apply them and we will always do everything we can to care for our patients, utilizing every resource we have to make that happen,” the statement read, quoting Munkarah. 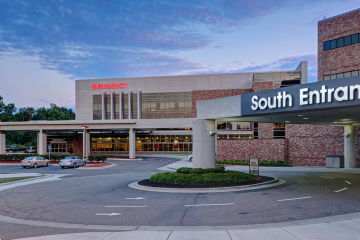