“This is our property, and we’ll defend it vigorously,”

“There was nothing deceitful or dishonest on our part,” 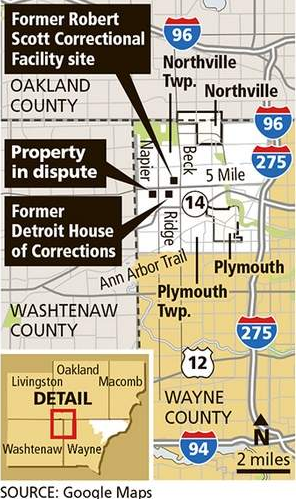 An ambitious plan to develop 500 acres of land in western Wayne County into an advanced technology powerhouse and retail district that is projected to create thousands of jobs has been stalled over a property dispute with the City of Detroit.

Northville and Plymouth townships have partnered to develop bordering property they own in their respective communities along 5 Mile, between Beck and Napier, to complete the project.

The proposal, which calls for using former Detroit House of Corrections farmland in Plymouth Township, the Robert Scott Correctional Facility in Northville Township and land in between, would include acreage Plymouth Township acquired through a Wayne County tax foreclosure sale in 2011.

But the City of Detroit claims 190 acres of that property should not have been included in the sale and that it still owns the land. The dispute with the City of Detroit over who owns the land has been tied up in court and partially delayed because of the city’s historic bankruptcy filing since last year but is expected to move forward in coming weeks.

“This is our property, and we’ll defend it vigorously,” Hollowell said.

Complicating the matter is that Northville Township officials have uncovered a potential problem with their ownership of the Robert Scott Correctional Facility, purchased from the State of Michigan for $1 in 2012.

Both the state and City of Detroit, which owned the property before the state did, could exercise claims on the Scott property if that parcel is not developed for a “public purpose,” such as building a park or even a police station, according to Northville Township Supervisor Robert Nix, who said the township stumbled upon the legal encumbrances from the site’s previous owners as part of due diligence on the title.

Officials had hoped the parcel would be a mixed-use development, perhaps including upscale retail and research and technology companies.

Nix pledged that Northville Township officials will move forward with development to the west of the Scott site regardless of what happens there.

“We’re trying to work through this with everybody,” Nix said, noting that thousands of jobs are possible if the development partnership succeeds. “This is a big, big project, long term. … This is a big benefit or spark plug for western Wayne County.”

Plymouth Township Supervisor Richard Reaume expressed frustration with the complications, touting the benefits that the development partnership could ultimately provide to the whole region.

“Here’s the City of Detroit … tying up Northville Township property, and now they’re tying up property that was foreclosed by the Wayne County treasurer,” Reaume said, referencing the dispute with his township over what is known as the DeHoCo (Detroit House of Corrections) parcel. “What we’re proposing is something that’s a benefit for all of Wayne County,” including Detroit.

Reaching a settlement in the case would boost development prospects for the entire corridor. Officials in Plymouth and Northville townships said they have been meeting monthly for about six months with state and county economic development officials, as well as DTE Energy, which would need to provide utilities to the area, on how to market and develop about 500 “buildable acres” out of the approximately 1,000 acres in the two communities that make up the corridor.

Those possibilities are complicated by the DeHoCo dispute.

The DeHoCo issue became a court fight after Plymouth Township resident Richard Sharland, a retired farmer and local activist, questioned the sale because it was affecting a friend who had farmed the land under a rental agreement with the City of Detroit, and he brought it to the city’s attention.

The parcel was part of 323 acres sold to Plymouth Township in 2011 in a tax foreclosure sale because of unpaid taxes by the City of Detroit and a private company. Plymouth Township real estate company DeMattia, under the name Demco 54, had purchased one of two adjacent parcels from the City of Detroit in 2006 but failed to exercise an option to buy the remainder — the 190 acres in dispute. The township combined the parcels improperly for tax purposes, according to Sharland, who said the township should have known that the parcels were separate.

“The City of Detroit residents should be concerned that they had money taken away from them. … They can use the money better than Plymouth Township can here,” Sharland said.

Plymouth Township paid more than $606,000 to purchase both parcels,which are valued in the millions of dollars. According to information supplied by Sharland, the assessed value for both parcels was $14 million in 2007,but that had dropped to $8 million for the disputed parcel and $1.6 million for the other parcel in 2009, a time, Reaume noted, when property values across the country were down.

No one takes blame

The resulting legal mess has three entities — the township, the city and the Wayne County Treasurer’s Office — assigning blame to one another.

Detroit’s position is that it’s illegal to foreclose on municipal property, Wayne County Chief Deputy Treasurer David Szymanski said his office is not at fault because the office relies on local units of government to provide proper documentation, and Plymouth Township’s Reaume questioned why city property outside of a city should be able to avoid tax foreclosure when taxes go unpaid.

He also disputed suggestions by Sharland that the township did anything improper. “We followed all the state procedures for land divisions,” Reaume said. “There was nothing deceitful or dishonest on our part.”

Reaume said the township simply saw an opportunity to purchase a piece of land with a unique natural feature. The property is split by Johnson Creek, and Reaume said officials could envision a recreation area with trails along the cold water creek.

Plymouth Township Trustee Bob Doroshewitz, who is at times at odds with the supervisor, backed up the assertion that officials were unaware of any problems associated with purchasing the property. Doroshewitz said Treasurer Ron Edwards, who did not return a call seeking comment, first brought the purchase proposal to the board to consider.

“That property’s worth millions. … There wasn’t a lot of debate and dissent,” Doroshewitz said. “We’re going to have to find some settlement, some middle ground. Both sides have dug their heals in.”

Hollowell said the city would have the option to sell the property and is not closing the door on a sale to the township, “but I don’t think that commitment has been made by the administration.”

He dismissed any concern that the city is holding up development in western Wayne County. Indeed, efforts to develop other portions of that 5 Mile corridor are likely to continue regardless of the dispute.

“It’s important for the city to protect the ownership of its property, and we will do so,” Hollowell said. “I think we have a responsibility to everybody to clear up title,” then good-faith negotiations about the “ultimate disposition of the property” can proceed.

The status of the state-owned DeHoCo prison site itself, which is east of the land in dispute between Plymouth Township and Detroit, remains unsettled as well.

Unlike the disputed parcel and the former Scott property, which were at one time both used as farm fields for the prison, the former DeHoCo prison site is contaminated and numerous buildings — described as something akin to those in the movie “The Shawshank Redemption” — remain standing 28 years after the prison closed.

State Rep. Kurt Heise, R-Plymouth Township, has introduced legislation to transfer the property from the state Department of Technology, Management and Budget to the state land bank in an effort to speed up development efforts that would tie it in with the corridor.

“It’s state-owned property that is a real eyesore for the community and detriment,” Heise said, noting that he wants the state to tear down the buildings. “The state also has a responsibility to be a good neighbor, and we, the state, need to clean that site up.”