Plymouth Township officials approved the purchase of six new state-of-the-art Automatic External Defibrillators (AEDs) last week in an effort to meet what has been described as a “critical need.” 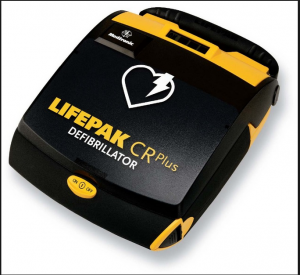 A single source bid from Physio Control of Redmond, WA for $11,868.52 was approved unanimously by members of the board of trustees following a report from Fire Chief Dan Phillips last month. Phillips reported there was a crucial absence of up-to date defibrillators throughout the township and those that exist are old, outdated and long-past their service life.

Phillips said the new AEDs are compatible with the units currently on board township emergency vehicles and would allow immediate hook-up when firefighters arrive at an emergency scene.

The need for the devices is part of an attempt to update and replace aging and out-of-date or non-working emergency equipment throughout the township and in the fire department where the need is “dire” according to Phillips, who presented a formal report regarding conditions last month in response to an administration request.

“The new AED devices will give employees, residents and members of the public a stronger chance of survival in the event of sudden cardiac arrest, should they be a candidate for defibrillation. Whether they live or die depends on how fast they receive treatment,” Phillips said.

According to Phillips, the new portable devices automatically diagnose life-threatening arrhythmias of ventricular tachycardia or ventricular fibrillation (cardiac arrest). The devices, he said, are simple to use and provide oral directions to the user, dictating step-by-step instructions when minutes can mean the difference between life and death.

The units will be installed in the Friendship Station on Schoolcraft Road, Township Park Pavilion 1, the Four- Seasons pavilion in township park, Township Hall, Lake Pointe Soccer Park and the DPW Building on Port Street. There are plans to replace the AED in the police department lock-up using funds from a municipal grant.

“It’s about time we’re doing something.” Phillips said after the meeting, referring to his report last month which cited eight years of neglect by previous township administrations in purchasing, repairing or replacing dated lifesaving equipment and vehicles in the fire department.

Irreversible brain damage can occur in approximately three minutes of cardiac arrest as organs shut down, one-by-one. Documented fire department response times in Plymouth and Plymouth Township currently average longer than six minutes. After that critical time, there is virtually no chance of survival in cardiac arrest, according medical experts and national statistics.

Phillips said he recommended to the board members that units be strategically placed throughout township work places so that no employee would be unreachable in case of a cardiac emergency. He said there are plans to train all township employees and classes for the public in the use of the AEDs will take place monthly, as firefighters’ schedules permit.

PARC to be site of Inside/Out display