Plymouth Township firefighters are a little hot under the collar following accounts of a recent house fire in the City of Plymouth which they feel downplayed their actions during the emergency and credited another department for a “fast response.”

Firefighter Greg Mangan of Plymouth Township Local 1496 said it was the quick response of the Plymouth Township department which helped control the damage at a two-story home at 1260 Ann Arbor Trail in the City of Plymouth last week. He said the call came into the dispatch center at “about 11 p.m.” and the Plymouth Township firefighters responded to the call even though it was in the City of Plymouth, usually served by paid on-call firefighters from the cities of Northville and Plymouth. The city and the township departments operate under an automatic modified mutual aid agreement as members of the Western Wayne County Fire Department Mutual Aid Association.

The township firefighters were at the home within 7 minutes of the alarm reporting a “fireplace fire.” The published comments from Northville/Plymouth Fire Chief Steve Ott thanking them for their “assistance”, did not sit well when, Mangan said, it was some time before the Northville/Plymouth city on-call firefighters arrived at the home. He said by the time the other department arrived, the township department had taken charge of the scene, and township personnel were responsible for controlling and extinguishing the blaze. The fire, which occurred during the windstorm Wednesday, kept firefighters at the scene for four hours.

According to reports, the township fire department responding with a crew of eight firefighters immediately connected water lines and entered the burning home within minutes of their arrival. Mangan said he and the other firefighters “fatigued after responding to nearly 48 prior runs” due to the windstorm, broke off into three teams. He said his team entered the home and worked until their portable air packs were nearly depleted, approximately 15 minutes later.

“The three of us worked inside and took down the interior walls while the three others worked outside taking out the exterior of the add-on fireplace with a chainsaw,” he said. “The fire spread from the fireplace to the interior and the basement ceiling joists. While we were working inside, two other firefighters manned the engine-pumper and water lines.

Reports by various township firefighters say it was almost 15 minutes later that the Northville-Plymouth Fire Department finally arrived on the scene, accompanied by Plymouth City Manager Paul Sincock. It was reported that the there was “some kind of “radio miscommunication,” according to Mangan. According to Ott, however, the Northville/Plymouth fire engine arrived at the scene only “3-4 minutes” after Plymouth Township, “at 11:17 p.m.”

A published photo taken at the scene during the fire and provided by the city shows the Plymouth Township fire engine at the scene although the identifying lettering and number identification are missing from the photo.

In a telephone interview after the fire, Ott acknowledged that Northville firefighters were late to the scene and stated that the heavy windstorm caused a “three and a half minute” delay in their dispatch.

“Plymouth Township got there first,” he said.

He said weather-related circumstances caused a problem with the receipt of the incoming signal to Plymouth City Hall, the location from which pages received from dispatch originate to on-call firefighters.

“Dispatch then sent the page to Northville Township dispatch who in turn sent it to us.” Ott said.

According to the township fire incident report based on 911 radio data obtained through a Freedom of Information Act Request (FOIA), the time of the initial 911 call from the homeowner was 11:06 p.m.. According to the report, dispatch personnel telephoned Northville Township dispatch for assistance at 11:08 p.m. and the first fire engine on the scene, Plymouth Township No. 3, arrived at 11:13 p.m. seven minutes and 9 seconds after the initial call.

Ott, citing his departmental reports, maintained his crew arrived at the scene in the Northville/Plymouth Station 2 engine at 11:17 p.m. and entered the home and still found fire extensions in the attic, first floor and basement ceiling. He said the combined effort of all the departments saved the home. Ott took over command at the time of his arrival from Plymouth Township Fire Captain Dan Atkins.

“Lots of credit to Plymouth Township-they’re good guys,” Ott said. He added that the day was filled with “a lot of good-spirited, cooperative effort between the two departments. He also stated the communication problem with city hall was “now fixed.”

This article appeared in the Mar. 23, 2017 print edition of The Eagle. 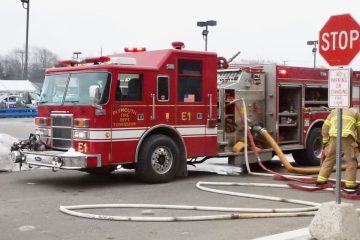 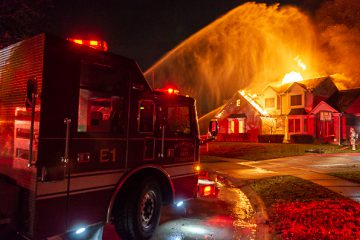