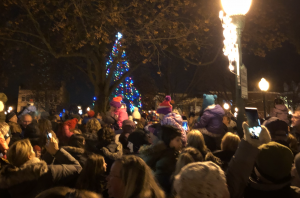 The arrival of Santa and Mrs. Claus in Downtown Plymouth warmed the hearts of children and adult’s Friday evening as they officially opened the Santa House in Kellogg Park.

For the special ceremony Santa arrived courtesy of the Northville-Plymouth Fire Department riding in a fire engine, received the key to the City from Commissioner Marques Thomey and Plymouth Township Supervisor Kurt Heise, and then turned-on the lights of the official Christmas Tree.

Santa and Mrs. Claus were joined by the P-CEP Choir and the Joel Tacey Magic Show.