Mr. Edwards, who plans to oversee the operation, will require the Township to increase their reliance on the services of the HVA Ambulance Co.

I have made it my business to become thoroughly informed about the issues surrounding our fire department and public safety in Plymouth Township. For me the stakes are high and the cost for a slow response in the event of a medical emergency could easily mean my life.

Over the past 18 months I’ve helplessly watched as our township officials systematically attacked and decimated our fire department personnel, reduced their staff to a level that places all residents at great risk and creates unbearable overtime and stress on the remaining 13 firefighters.

Our officials falsely profess they must eliminate a budget shortfall caused by the City of Plymouth’s pullout of a joint fire services agreement and at the same time hire more police officers and office staff personnel. While turning down government grants that would fund the fire department as other neighboring communities have done, they’re busy buying new golf carts, voting to build a new township park warming pavilion for winter use, unabashedly showing little discretion or control over their senseless spending.

As if the antics of our elected officials reached a zenith when they manipulated and refused to allow the fire department issue to go before the electorate, it’s their latest move that has me really scared.

At the request of the Treasurer, Ron Edwards, the police department union is now considering his plan to combine fire fighter and police duties into public safety officer positions or PSO’s.

The proposed plan will necessitate the hiring and training of police officers to respond to fires and medical emergencies, purchasing additional police equipment, fire gear, radios, and police cars.

In addition, Mr. Edwards, who plans to oversee the operation, will require the Township to increase their reliance on the services of the HVA Ambulance Co. for medical emergencies, as the PSO’s will be classified as medical first responders, which is just a step above a first aid certification.

What Mr. Edwards doesn’t understand is crime fighting and fire fighting don’t mix. It’s too much responsibility for one individual, and the right training for EMS is critical to save lives, like mine. All of our current fire fighters are already certified in advanced life support and the cops don’t want to be PSO’s.

At the scene of a fire a policeman would have to secure his weapon, remove his ballistic vest and gun belt and suit up with his fire gear and air tank located in the trunk of his police vehicle, and wait for others to do the same to form a team, before fire trucks and  fire equipment arrive. Minutes are precious and fires double in size every two minutes.

PSO models don’t work as roles are easily confused. Cops will do cop work first when they arrive on the scene. There are so many rolls to be acted upon, like extrication, traffic control, entrapment, fuel spills and more.

Mr. Edwards decision is not in the best interest of public safety and is without sense of reason. The cost will be the loss of lives and property and wasted taxpayer dollars. 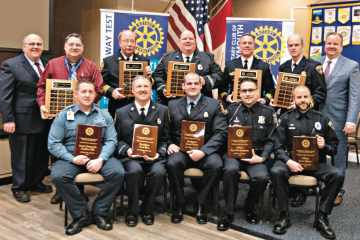