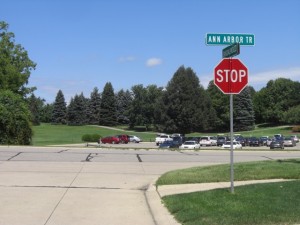 “It appears there’s a rush to do something; it’s the appearance of impropriety,” Township Resident.

Several residents of Woodlore North subdivision attended the meeting of the Plymouth Township Board of Trustees last week to reiterate their objections to the proposed plan to create a new entrance to Hilltop Golf Course.

The proposed new entrance is part of a $2.5 million capital projects budget approved at the meeting by a 4 to 3 vote of the board who plan to sell $1.9 million in 10-year bonds to pay for the project. Township officials said the plan includes an increase in parking spaces at the golf course, the repaving of the parking lot and the new entrance, along with several other park improvements.

During the public comments portion of the 5-hour meeting, members of the subdivision homeowners association board and other subdivision resident’s express their concern about the plan they said would increase vehicle traffic and endanger pedestrians in their subdivision.

In May, the homeowners association presented the township board with a letter expressing their opposition to opening the new entrance.

According to already developed plans for the golf course project, the new entrance would be exactly aligned with Sandalwood Drive and would necessitate the construction of passing and deceleration lanes by Wayne County.

Matthew Justus, the homeowner association’s treasurer, after speaking at the meeting, said he felt there should have been better communication between officials and residents and hoped for some- thing in writing stating the township would close Powell Road, as the residents requested in the earlier letter.

Justus and other residents said if the road were left open it would provide an easy opportunity for drivers to avoid traffic signals at both Ann Arbor Road and Beck and Ann Arbor Trail and Beck.

Justus said that although both Township Supervisor Richard Reaume and Township Treasurer Ron Edwards made a verbal agreement to close Powell, he has doubts.

“It appears there’s a rush to do something; it’s the appearance of impropriety,” he said.

Keith Postell, association vice president, said he wasn’t worried. “This is just a budget proposal, they still have to vote on each item.” Postell said.

Postell claims Reaume and Township Clerk Nancy Conzelman met with some of the association members after they submitted their letter last May to say they would do what they could about the entrance and would work with Wayne County. Postell is a member of the Plymouth Township Planning Commission.

Ed Snage, the association architect, is a subdivision resident and also serves on the Plymouth Township Board of Review. One Woodlore North resident, an attorney who is not on the association board, questioned the practically of the township owning a golf course, saying “Now we’re talking about the addition to increase the cost of the course by putting in a cut to make it more attractive…It’s not your money to spend, it’s the community’s money to spend.” Hillltop Golf Course operated at a $96,181 loss last year, according to township records.