The protests and objections of numerous nearby residents apparently prompted officials from NorthRidge Church last week to withdraw a request for the rezoning of 24-acres of vacant Plymouth Township property.

A crowd of residents concerned about proposed amendments to the zoning ordinance attended a special study session of the board of trustees last week and soundly denounced the plan to construct a residential development on the land owned by the church.

The land abuts the long-established neighborhood of many of the residents who protested the requested zoning change. Their concern was the requested change to the Cluster Housing Option (CHO), initiated by the mega-church located North Territorial Road in the township.

The study session took place at the request of the developer, Grand Sakwa, seeking design alternatives for a planned development of single-family structures. Grand Sakwa, one of the largest real estate developers in the Midwest, also purchased the 100,000 square foot former Super Kmart property at Ann Arbor Road and Haggerty in the township.

Under current township rules, the church property is zoned to allow for the construction of 19 homes. According to those familiar with the plans, Grand Sakwa has proposed building 78 homes on the site. The firm has yet to exercise an agreement to purchase the property and has petitioned the township planning commission for zoning ordinance amendments known as density bonuses. Residents claim granting unbridled cluster housing bonuses is a risky game that could change the complexion of the township open-space concept, allow other developers to follow suit and leave the township open to litigious developers.

NorthRidge Church was represented by former church general counsel Bryan Amann who is now the attorney for Grand Sakwa. Amann filed the application as the owner-agent and requested the township planning commission approve changes to the CHO. Amann is also the church Spiritual Formation Director. The subject changes are known as Text Amendments versus Zoning Changes. The commission members approved the amendments on a 5-2 vote in December with board Trustee Bob Doroshewitz, who serves as the liaison to the commission, and commission member Keith Postell casting the negative votes.

The church, established in Detroit in the 1950s as Temple Baptist, now has a following of 20,000 members and the huge auditorium-like building can seat more than 3,000. The church has a history of a rocky relationship with the township concerning zoning restrictions. In 2011, Northridge and the township ultimately agreed to a Federal Consent Judgment following a dispute. 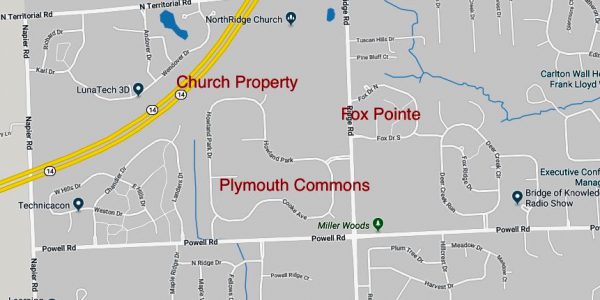 The two upscale subdivisions most affected by the proposed development, Plymouth Commons and Fox Pointe, were represented at the study session by association appointed attorneys.  The lawyers claimed members of the planning commission were motivated to accommodate Grand Sakwa and that they erred in their decision to move the changes forward. The attorneys for the subdivision residents claimed the ordinance change was unreasonable.

Joseph Van Esley, a township resident and real estate broker who lives near the church property, is a member of the township board of review. Speaking at the last two meetings of the board of trustees, Van Esley said he felt the applicants were going through the “back door” to allow for extra density and “manipulating the township zoning ordinance.”

“How many communities has McKenna given the community absolute discretion on density for cluster ordinance? If you’re going to re-zone, re-zone it, don’t leave it up to somebody’s discretion,” Van Esley said, directing his comment to Lara Haw of McKenna Associates, the contracted urban planner for the township.

During the meeting, Township Supervisor Kurt Heise announced that NorthRidge had withdrawn the pending application for change that night. He said the proposed changes were more restrictive to potential developers than before, but there was still a need to update the ordinance.

“The trend in Plymouth Township is toward these kind of single-story ‘active senior’ empty-nester homes.  They’ve always been controversial, and it’s time to update the Cluster Housing Ordinance to make sure we balance these housing trends with community expectations. Doing nothing may get you momentary applause but it doesn’t address development for the 2020s,” Heise said after the meeting.

Shawn Woolford, president of Plymouth Commons Homeowners Association, said she was pleased with the outcome of the study session and the fact that NorthRidge had dropped the application.

Wolford said her homeowners association members had seen concept drawings and the Grand Sakwa plan that had but one-road for entrance and egress, “and the homes were but 10 feet apart.” She said it was rumored that NorthRidge had threatened to “develop low-income housing or a charter school” on the site if the rezoning requests were blocked. She said her concerns included increased traffic, power usage and water, schools and property values if the township approved cluster homes for the NorthRidge property.

“We have a number of examples in the township where the cluster housing option enabled the preservation of natural amenities, allowed for open green space, and provided buffers for adjacent properties.

“What I am opposed to is bypassing the zoning ordinance in an effort to jam as many houses as possible on a small parcel of land under the guise of a cluster housing option.  “We have very few parcels of land left in Plymouth Township that are undeveloped.  We have to be very careful and selective in how that land is developed,” Clinton explained.

“I’m glad that I called for a study session to gain more public input and ideas on this important issue,” Heise said.

An earlier version of this story incorrectly recorded the maximum number of homes allowed by zoning requirements as eight. Under current zoning the church property is zoned to allow for the construction 19 homes.