Melvin (Butch) Hollowell, Detroit’s corporation counsel: “This is our property, and we’ll defend it vigorously,” Detroit Free Press, May 30, 2014

“Detroit attorneys have said they are more than confident the land will be returned to the city based on the clarity of state law.” 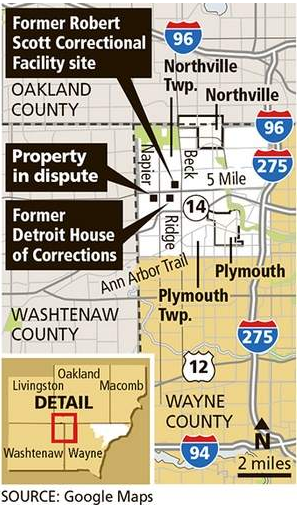 Northville Township Supervisor Robert Nix and Plymouth Township Supervisor Richard Reaume last week announced an economic development initiative branded as the Michigan International Technology Center (MITC). The primary objective is to repurpose the former Detroit House of Corrections and the Robert Scott Prison land for private development, according to a statement from the officials.

The statement did not address the current lawsuit against Plymouth Township by the City of Detroit demanding the return of 190 acres of land included in the proposed development. Lawyers for the City of Detroit contend in court documents that the township mis-recorded the ownership of the property, west of Ridge Road and south of Five Mile Road, and then sent erroneous documentation to the Wayne County Treasurer regarding that ownership and subsequent unpaid taxes on the land. Township officials then purchased the land, legally the property of the City of Detroit, at a 2011 Wayne County tax sale foreclosure for about $600,000, according to court records. The land had been on the township and county tax rolls at one time valued at more than $15 million. City of Detroit attorneys have claimed in legal filings that state law is clear that municipally-owned land is not subject to foreclosure proceedings and that the City of Detroit has always been the legal owner of the property.

Northville Township Manager Chip Snider said that the parties involved have been assured that there is a resolution coming on this issue and that during a meeting last week attorneys assured officials of a positive outcome.

If Detroit prevails in court, however, penalties include the return of the land to the city and/or payment to Detroit of up to double the market price of the land. The matter is being adjudicated by Wayne County Circuit Court Judge Robert Columbo who will hear motions on the issue Feb. 27. Detroit attorneys have said they are more than confident the land will be returned to the city based on the clarity of state law.

Snider said that Northville may have somewhat of a head start on Plymouth as the township already owns all the land from Beck to Napier and has had some interest from buyers looking at smaller parcels of 10-15 acres. Some parcels of the land on the south side of Five Mile Road are already developed with utilities such as water and sewer. Approximately 78 acres of the property located in Plymouth Township is considered wetlands and unbuildable, according to tax assessments.

Snider said Northville is working on developing the north side and the disputed acreage is on the south side of Five Mile Road in Plymouth Township.

“The goals of this project are to create a large scale, multi-jurisdictional real estate development containing private and underutilized public land holdings as a platform for investment,” according to the prepared statement. The primary goal is to create development ready sites that will be marketed to technology based users and developers. Initial properties are projected to be available early 2015, the officials said.

The project will involve approximately 800 acres, including the property involved in the current lawsuit, and “could support 5 million square feet of facilities, $620 million of investment and provide more than 9,000 jobs,” according to the officials. “Currently, many of the area firms are international entities operating on a global basis prompting the branding as the Michigan International Technology Center as a place for technology users and reflecting the current business attraction in Western Wayne County,” the statement concluded.