Michigan State Police are hoping the public can identify this man wanted for questioning in a recent fatal shooting in Inkster.

Michigan State Police investigators are asking anyone who may have information about an Aug. 3 homicide in Inkster to come forward. 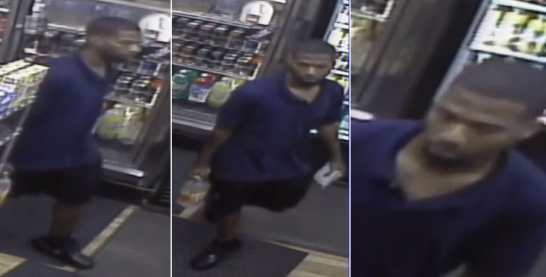 Investigators said that the preliminary investigation indicated that the victim, Hassan Ibrahim Tanana, 31, of Inkster, was shot numerous times during an altercation inside the store with a man described by witnesses as African American.

“Hassan is very well known in that neighborhood and especially to regular customers of the party store,” said State Police First Lt. Michael Shaw. “He suffered from some mental disabilities and was known to sit outside of the store and ask for spare change to buy pop or other items inside of the store.” The victim lived in a group home near the store, located on Inkster Road near New York Street.

It is believed that the suspect was involved in a verbal altercation with Tanana, left the store and returned later confronting the victim in the store and shooting him. The victim was transported to Beaumont Hospital Dearborn where he later died of his injuries.

The suspect fled the scene after the shooting in a grey Dodge Durango, according to police reports.

“The suspect is also known to be a regular customer at the store,” Shaw said. “We are hoping that the public will help us identify the suspect from the surveillance tape, before he hurts someone else.”

Michigan State Police investigators are asking anyone who recognizes the suspect, suspect vehicle or witnessed the incident o call the tip line at 855- 642-4847 (855-MICH-TIP).

Company will invest $2 million in Plymouth