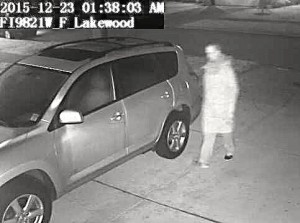 Plymouth Township Police has released photos taken from a home surveillance video and are seeking help in identifying the subject after several vehicles were broken into on December 23, 2015.

The thefts occurred between 1:00 a.m and 3:00 a.m. on Lakewood near Five Mile and Haggerty roads in the Lake Pointe subdivision.  Items taken from the vehicles were GPS, laptops and loose change 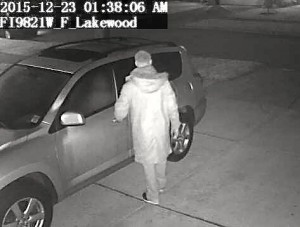 according to Det. Lt Bob Antal.

The suspect appears to be a white male wearing a knee-length down coat with a hood, possibly a fur lined hood. The suspect could likely be an area resident.

Residents and citizens are being asked to contact township police at 734-354-3232 with any information.