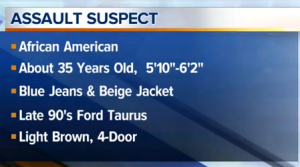 According to a police report issued by Northville City Police Chief Gary Goss, a 69-year-old woman was attacked Wednesday morning in her driveway after returning to her home on Lake Street from the Northville Community Center.

According to the police report, the woman put her car in her garage and was walking down her driveway when an African American male in his thirties with a medium build, wearing a dark, ¾-length cloth coat and carrying a burgundy portfolio approached her and asked if she would take part in a survey. The victim questioned the type of survey and noticed that the person did not have any type of identification such as a lanyard with an identification card or badge and asked to see some I.D. This is the last that she remembered of the incident, she told police. She regained consciousness and managed to get into her home and call a friend who took her to Providence Hospital.

The victim suffered a fractured jaw and a severe head injury. She has been admitted to the hospital and is listed in stable condition.

The victim’s purse was taken containing her cell phone, credit cards and identification. The cell phone has been recovered in Farmington Hills. The suspect’s vehicle was described as a light colored, possibly tan, sedan.

The Farmington Hills Police reported a similar incident involving a woman being attacked after arriving home in her vehicle just before 11 p.m. yesterday. Both attacks occurred on Wednesday.

“She was making trips back and forth to her car, and during one of those trips she was hit on the head with some kind of stick or club and the suspect fled, probably … due to the commotion,” Nebus said. “We were receiving 911 calls.”

In the Farmington Hills incident, which took place in a wooded area near the Eight Mile and Halstead Road area near the Green Hill Apartment Complex, police described the woman’s attacker as a black man, 35 years of age, medium build, 5-feet, 10-inches to 6-feet, 2-inches tall wearing a beige jacket and jeans. He was seen driving a late 90s light brown Ford Taurus.

The woman was taken to a local hospital and is listed in critical condition.

Goss said officers are currently working with neighboring jurisdictions, and asked that anyone who may have information regarding this incident call (248) 349-1234.