Northville Township Clerk Sue Hillebrand announced her retirement after 26 years on the job during the regular meeting of the township board of trustees last week prompting three new appointments to positions in township administration.

All the appointments will become effective Feb. 15.

Hillebrand told the trustees that she was resigning to help with her recovery from major surgery and to prepare for the arrival of twin granddaughters due in July. They join a 4-year-old sister, she told the board members.

Hillebrand was first elected as township clerk Nov. 3, 1992 and she has continued to serve the community during her more than 30-year residency, including as a member of the township board, the township Beautification Commission and the Parks and Recreation Commission.

During her 26-year tenure as township clerk, Hillebrand has conducted 50 successful elections, making her the longest-elected clerk in the history of Northville Township. She has served on both board of the Michigan Association of Municipal Clerks (MMAC) and the Association of Wayne County Clerks. She was nominated and elected the MAMC Township Clerk of the Year in 2008 for her involvement and interest in improving her professional field.

Members of the board of trustees commented on Hillebrand’s strong work ethic, honesty, and unwavering integrity.  She was honored at a public retirement reception on Monday at Northville Township Hall.

Hillebrand suggested Banner as her replacement for the remainder of her term which will expire in 2020.

Supervisor Bob Nix made the appointment which was approved by a vote of the trustees.

Banner has been a Northville resident for more than 35 years. She was originally appointed as a trustee in March 2001 to replace Bill Pomeroy and served until November 2012, when she was elected township treasurer. In addition to serving on the Board of Trustees, she has been a representative on the Economic Development Corporation (EDC) and Brownfield Redevelopment Association (BRA), has served on the Historic District Commission (HDC), the Parks and Recreation Commission and the Zoning Board of Appeals.

Shadko has been a Northville resident for more than 22 years and has been a trustee since November of 2012. In addition to serving on the Board of Trustees, Shadko has been on the Historic District Commission since 2011 and is currently also serving on the Planning Commission. He has served on the EDC and BRA in the past and is also the current SEMCOG alternate. He has had perfect attendance at all board of trustees meeting since being elected.

Shadko’s appointment left a vacancy on the board for which Nix recommended Frush. That appointment was also approved by a vote of the board of trustees.

Frush has been a resident of Northville for 7 years. He has served on the Friends of the Northville District Library and on the Northville Education Foundation and is currently serving on the Economic Development Corporation. 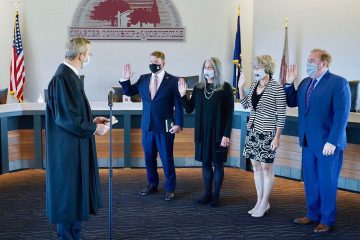