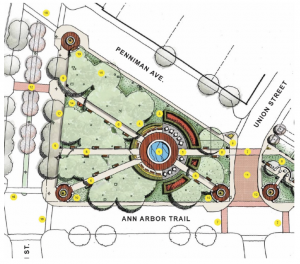 Plans for a new Kellogg Park fountain in downtown Plymouth were presented to members of the Downtown Development Authority (DDA) at a meeting last month.

According to a spokesman, the DDA is embarking on a major program to make upgrades to both the park and the fountain. “This is a DDA led project with the hope of having the upgrades completed by July 2017, in time for the city’s 150th anniversary,” he said in a prepared statement.

The DDA, in cooperation with the Wilcox Foundation, is funding the initial design concepts and has previously accepted proposals from a number of firms. Members of the DDA selected the design team from Russell Designs of Northville and WESCO Fountains of Florida to begin the conceptual designs for the project, which is expected to cost $1 million.

Funding for the improvements and the new fountain will be raised through private and community funding, according to the statement.

The preliminary designs were revealed at the Feb. 29 meeting and the input of the public along with comments regarding the plans is being sought. The plans can be found at http://downtownplymouth.org/DocumentCenter/View/33 0

Until final designs are approved, the Plymouth Downtown Development Authority and City of Plymouth will continue to seek public input. Questions or more information about the project is available at the DDA office at (734) 455- 1453 or by email at www.dda@ci.plymouth.mi.us.