Environmentalists from the Friends of the Rouge visited the creek and pond at McClumpha Park in Plymouth Township last week to again monitor the impact of the 4-acre parking lot under construction at the site. 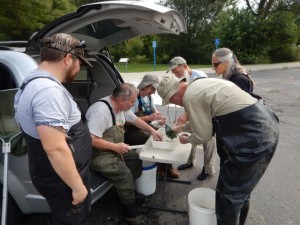 The group has been concerned about the impact of groundwater run-off and debris entering the waters of the creek and pond, particularly after a rare species of fish called the Least Darter was discovered in the water. Members of the volunteer group met at the park last Friday morning to conduct another sampling of the water quality as construction continues.

Volunteer Monitoring Program Manager Sally Petrella was also in the park last week to talk about mitigation with officials from the Michigan Department of Environmental Quality (MDEQ) who had previously determined that planned parking lot is in violation of state regulations. Township officials, including Township Supervisor Shannon Price and Parks and Grants Manager Mike Mitchell, were at the meeting to discuss proposed corrections and engineering changes. 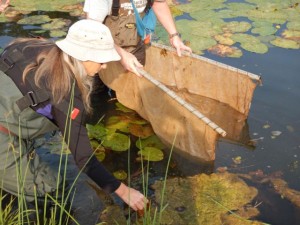 Hae-Jin Yoon, Southeast Michigan supervisor for MDEQ, said the township needs to make improvements to comply with state regulations, “so runoff water goes in more of an upland area.”

The township had agreed to those corrections and will incorporate the alterations into the site following approval of the plans by the state. Other problems at the site include a “bad mix” of concrete poured in the parking lot. According to Price, the concrete contained a chemical that would prevent proper hardening and had to be broken up and removed. The replacement concrete installation was the responsibility of the supplier, Price said, and will not add to the $719,000 cost of the 209-car project, according to Treasurer Ron Edwards who is overseeing the parking lot construction.

The environmentalists have been regularly sampling the waters that flow through the park since 2003. They have determined that the water quality in the pond and stream is one of the best in the 126-mile long Rouge River.

Wearing waders and carrying fine mesh nets, the seven experts, led by Petrella, waded into the creek and pond to take their samples. They discovered eight species in the stream and three species in the pond, including the rare Least Darter.

The Friends of the Rouge mission is to promote restoration and stewardship Rouge River through monitoring. The group hosts educational projects to train local teachers regarding the ecological significance of the 467 square mile watershed and Rouge River.

Volunteer Sue Thompson of the Wayne County Department of Public Services-Water Quality, Philip Kukulski, a high school science teacher and Alan Van Kerckhove, a retired Detroit Water and Sewer engineer, assisted in the count and measurement of the 119 fish found by the group. Bob Muller, founding member of the Royal Oak Nature Society and official of the North American Native Fishes Association conducted the identification while Petrella recorded the species.

Petrella said she was disappointed the township had yet to address the silt they allowed to enter the mouth of the stream that could endanger the habitat of the sensitive fish species, something officials had promised last week to correct.

“We’ll be back,” Petrella said,