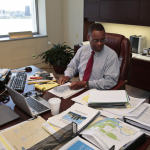 A request for hearing to re-open a City of Detroit lawsuit, closed in August after the city bankruptcy, was filed this week in Wayne County Circuit Court.

The City of Detroit has requested a hearing to open the now closed case that sought to reclaim property in Plymouth Township that was once home to the Detroit House of Corrections. The request for a motion hearing occurred after a local resident contacted Detroit Emergency Manager Kevyn Orr in September requesting a personal meeting. Richard Sharland, a long-time township resident and farmer, said he was originally prompted to find the true owner of the property when a friend of his was leasing the land, adjacent to his property, to raise crops. Sharland was curious about his friend’s requirement to pay Demco 54 a rental fee for part of the land and another fee to Detroit for the other section.

The Detroit suit was filed April 5 and amended April 18. Detroit contends that following the 2006 sale of 133 acres on the eastern-most part of the 323-acre site, to Demco 54 LLC, a property transfer affidavit was filed and a property split approved that should have indicated Detroit had kept the remaining 190 acres. It states that state law, and specifically the State Tax Commission, forbid the foreclosure of property owned by a city.

A status conference took place July 5 before Circuit Court Judge Maria Oxholm regarding the suit brought by attorneys for the plaintiff, the City of Detroit. Attorneys for the co-defendants, Plymouth Township and Wane County Treasurer Raymond Wojtowicz, attended the court procedure.

In August following the status conference, when the City of Detroit filed a judicial order and administrative closing due to the bankruptcy filing, Sharland contacted Orr. A recording discrepancy by Plymouth Township failed to identify the property as two separate parcels, one of 190 acres and the other of 133 acres. The 190-acre parcel was owned by the City of Detroit and the 133-acre plot was owned by Demco 54. Property tax assessments and notifications went to Demco 54 on the entire 323 acres but were never paid. Notices of taxes due or delinquency on the 190 acres never went to the City of Detroit, the true owner, due to the incorrect recording in the township assessor’s office. Supervisor Richard Reaume, by township charter, is the chief assessing officer for the township, although the actual assessing is done by an outside provider, Wayne County Appraisals, based in Westland.

The township paid $606,150 in 2011 for two parcels of land totaling 323 acres being foreclosed and sold by Wayne County for back taxes. According to the affidavit filed Jan. 9, the 190-acre parcel of the former Detroit House of Corrections property bordered by Napier, Five Mile, Beck and Ridge roads still belonged to the City of Detroit. The two land parcels had not been correctly split and identified as owned separately in the township assessor’s office which caused tax bills for the entire 323 acres to go to a corporation, Demco 54, which owned only 132 acres of the land.

When property taxes were not paid on either parcel, the county treasurer offered the entire property for sale for back taxes in September of 2011.

The motion to dissolve the administrative closing will be heard this month by Judge Maria Oxholm.