Gen. Dwight D. Eisenhower gives the order of the day, “Full victory – nothing else,” to paratroopers in England, just before they boarded their airplanes to participate in the first assault in the invasion on June 6, 1944

This year June 6 marks the 74thanniversary of the D-Day, the amphibious attack landing on the sand beaches of Normandy France that was the turning point of World War Two.

Over 5000 allied ships of all sizes and types, the number necessary to transport troops and supplies, converged at dawn on six landing areas under the command ofU.S. Army Gen. Dwight D. Eisenhower, the Supreme Commander of the Allied Expeditionary Forces in Europe during World War II.It was the biggest seaborne invasion in military history.

“Soldiers, Sailors, and Airmen of the Allied Expeditionary Force: you are about to embark upon the Great Crusade, toward which we have striven these many months. The eyes of the world are upon you. The hopes and prayers of liberty-loving people everywhere march with you.”

“Your task will not be an easy one,” Eisenhower said. “Your enemy is well trained, well equipped, and battle-hardened. He will fight savagely.”

The battle, known famously as D-Day, was catastrophic. On the first day of the invasion alone, Allied casualties exceeded 10,000 troops. Throughout the course of the campaign, the casualties multiplied to more than 200,000.

Within minutes all the beaches were conquered except Omaha Beach where the American troops were ravaged by intense shooting. The Allied losses estimated at 4500 soldiers-killed, missing or captive with 2500 losses alone on Omaha Beach.

One local American hero who took part in the infamous Allied invasion on Omaha Beach on D-Day was the late Fred Millard of Northville Township. Millard, was born in Plymouth and grew up in Livonia was a member of the most decorated infantry division of the US Army, the 1stInfantry Division, known as the “Big One” landed with the First Wave on Normandy’s Omaha Beach along with the 29thInfantry Division and nine companies of U.S. Army Rangers.

After being severely wounded during his service in North Africa and Sicily, Millard was awarded two Purple Hearts and the French Legion of Honor Medal. He received one of his Purple Heart military decorations from General Eisenhower himself in England.

In 2010 he received a letter from Graham Paul, consul general of France in Chicago informing him that has been named Knight of the Legion of Honor.

“My fellow countrymen will never forget your sacrifice,” Paul wrote.

If one were to visit Omaha Beach today, It would be difficult to imagine that the beach was the site of one of the bloodiest days in history. In the hills above you can see the Normandy American Cemetery where more than 9,000 U.S. troops rest in peace. The endless rows of white stone crosses and Stars of David served as sobering reminders of the epic battle that took place there.

M-14 in Plymouth scene of 2 fatalities in 48 hours 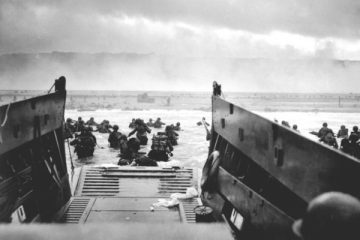