Public support saved the historic Penn Theatre from the wrecking ball in 2003 and last week, that same public display of concern saved the traditional holiday showing of a beloved classic film at the theater.

In response to the large gathering of supporters under the theater marquee last Thursday, Paramount Pictures relented and will allow the theater to show the holiday film during the first weekend in December. That decision reversed an earlier announcement that Paramount Pictures had granted exclusive licensing for “It’s a Wonderful Life” to Fathom Events for the holiday season. There was a nationwide moratorium in place, and no other theaters, including the Penn, would be allowed to show the film which has been a tradition at the theater for 15 years.

Friends of the Penn Executive Director Ellen Elliot learned of the moratorium early last week and on Wednesday posted the decision on social media. Elliot said she knew that Paramount had approved exceptions to theaters that had shown the movie every year. Elliot asked Plymouth residents to show up and demonstrate their support for the 1946 classic.

She got her early holiday wish when more than 200 supporters showed up, many brandishing handmade signs, to have their photos taken to send to Paramount pleading for the holiday classic which is a tradition in Plymouth.

Elliot explained that the outpouring of support in only 24 hours was typical of the Plymouth community which saved the historic theater from demolition in 2003. The Penn was reopened in 2006 after nearly $1 million in ren- ovations funded by donations and fundraisers. The Penn now operates as a non-profit.

Elliot said that seeing the classic film on the large theater screen during the holidays is a unique experience in Plymouth when folks then walk out the front doors and see Kellogg Park and the Walk of Trees illuminated for the season.

“Community support saved the Penn from being demolished and today it saved one of Plymouth’s treasured Christmas traditions,” she said. 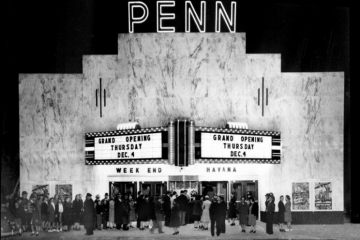