When the anticipated crowd of nearly 15,000 arrives at The Inn at St. John’s in Plymouth next weekend to view millions of dollars of classic automobiles from around the world, they may not realize this might be one of the final Concours d’Elegance in this venue.

This is the 39th Concours d’Elegance of America which moved to the Plymouth location 7-years ago to take advantage of the location and beauty of the rambling golf course on which to display the rare and vintage automobiles.

Concours d’Elegance Director Diane Fils-Schnieder confirmed that the event has been approached by other venues hoping to lure one of the most prestigious shows in the country to another site. The contract between Concours d’Elegance and the Inn at St. John’s expires next year, at the end of 2018, which would be the eighth year the show has been in Plymouth Township.

The prestigious display features 3 -days of festivities including 15 events  and is considered by many to be the  third most prestigious gathering of car enthusiasts in the country. Ranking just under Pebble Beach and Amelia Island, according to Fils-Schneider, the show  features some of the rarest, most beauti ful and most expensive autos in the  world. This year, more than 300 classic vehicles, including antique and vintage  cars and motorcycles will be on display.

Exhibition at the Concours is by invitation only and the vehicles are carefully juried by experts before the coveted invitations are issued to owners around the world.

Fils-Schneider said the only problem at The Inn at St. John’s is the parking for the huge crowds who flock to see one of the most famous classic auto exhibitions. This year, to alleviate that situation, the Concours will offer shuttle bus service from Plymouth High School located on Beck Road in Canton Township to the show grounds, which she said, she hopes will help with the parking situation.

Currently, the Archdiocese of Detroit plans to build a new $100 million luxury condominium development on a portion of the current golf course acreage.

If township officials approve the final plans, the 27-hole golf course will be reduced to an 18-hole course and a 10,000 square foot commercial office or multi-family building will fill the southwest 3-acre section of the property. Luxury homebuilder Toll Brothers submitted plans to township officials in May to construct a private, gated community made up of 174 townhomes on 200-acres of the St. John’s grounds.

“We’ve been approached by different venues.” Fils-Schneider said last week after a press preview of the event. She added that the Concours left Meadow Brook Hall at the end of 2010 after 31years, “because of the lack of a hotel.”

She said that the management at St. John’s was without fault and “they could not be a better partner. They are just wonderful.”

She added that the event is being courted by other concerns eager to move the prestigious Concours to various locations.

“You have to do due diligence-it’s only good business.”

Take in ‘The Lake Effect’ 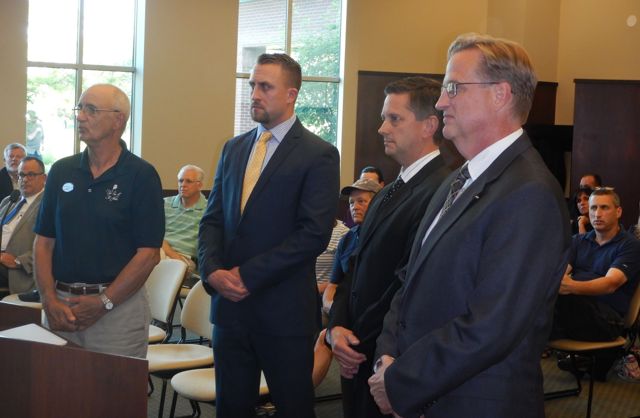