Those dining outdoors in downtown Plymouth next summer might want to take special care with their appearance. After all, they will most likely be on camera.

Plymouth City Commission members recently approved a plan allegedly proposed by the Downtown Development Authority to require surveillance cameras at any restaurant in the downtown area that offers outdoor dining.

This is the same city that approved a measure to ticket those parked for longer than the two or three hours allowed-waiving the fine the first time but upping it incrementally to $75 for any third parking offense.

What a great place for business. What a way to encourage shopping and dining in the community. What a warm, welcome feeling visitors must receive when they receive a $25 parking ticket for sitting at an outdoor table having lunch while being carefully and overtly scrutinized by a surveillance camera.

Ah, well, it is the wave of the future, we guess. After all, London has more surveillance cameras than any other city in the world. A visitor there cannot avoid being under surveillance at all times, and according to officials, it has helped curtail crime and even aided in the capture of terrorist bombers.

We just find this future unpleasant. We long for the Norman Rockwell atmosphere that down- town Plymouth, particularly, used to exude. We thought that was the community that people in that town wanted and strived to perpetuate and continue. But, apparently, that isn’t a luxury available any longer.

City officials have said that diners won’t even notice the cameras, which also makes us a little sad. Are we so used to constantly being in the presence of potential wrongdoing, we don’t even notice the invasion of our privacy anymore? That’s a very depressing sign of the times.

Officials have also said that the cameras will help the restaurant operators, too, because it will prevent thefts of the furniture and equipment they leave outdoors. Once more, we find that a sad commentary on the current state of affairs in our rapidly changing world.

The cameras are also needed, we’ve read, because the city has reduced the police force so this mechanical crime deterrent is needed in place of officers on the street.

That, too, is an unpleasant reality in too many communities facing decreased property tax revenue. It seems the first place officials look to reduce expenses is often public safety, in the form of police and fire protection. But,we know, it is a fact of life and it is the way of the world in which we now are forced to contend.

It seems, somehow, unfortunate, however, that businesses, who continue to pay taxes on their property and equipment, and who are the backbone of any vibrant and attractive downtown, are the ones now forced to pay for surveillance cameras to replace police protection their hefty tax dollars were already funding. Those businesses, too, are the first ones hit by the parking fines now being imposed on shoppers, clients, visitors and diners.

Yes, we know. It is the way of the future, it is necessary, it helps everyone, it is the economy and on and on. We really aren’t criticizing any- one.

We are, however, lamenting the loss of a lifestyle and sense of community that was once the most attractive throughout the entire area.

We miss the feeling of freedom and absolute security that used to mark downtown Plymouth, where one could walk through Kellogg Park at midnight and feel completely secure.

And if one chose to do so in pajamas, it would never be recorded on videotape. 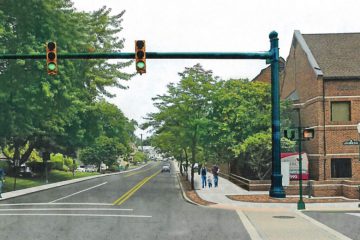