The FBI and Canton Police are investigating a bank robbery that occurred at Huntington Bank yesterday afternoon, just after 4:00 p.m. The bank branch is located at Michigan and Beck Road. 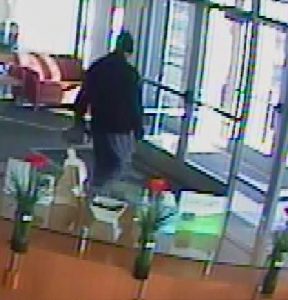 According to police reports, the suspect, a white male in his 30’s, was wearing a black hat, black coat, grey pants, sunglasses and a mask made of bandages covering his face. Police said the man approached the teller with a gun and demanded money and then fled in an unknown direction after receiving an undisclosed amount of cash.

Canton Police are asking for assistance in identifying the suspect individual from surveillance photos. Anyone with knowledge of the suspect or the robbery is requested to call the Canton Police Department at 734-394-5400 or Crime Stoppers at 1-800-SPEAK-UP.