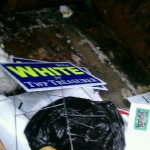 “Reaume attempted to deflect criticism of his actions by noting that White did not obtain permission from the property owner to add her signs to the large number already at the site.” -PLYMOUTH EAGLE

Once again Plymouth Township Supervisor Richard Reaume has been caught in an embarrassing situation. However, this time there could be some legal implications.

Last May, Reaume age 62, a Republican candidate for re-election after serving two terms, ran into the rear end a Plymouth school bus early one sunny afternoon. Some might say an understandable event, considering the sun could have temporarily blinded him or the yellow paint on the bus was not that bright, that is if you are a member of the township officials’ clan.

It was unclear from the police reports whether Reaume was ticketed at the scene or sometime later but he did receive a violation for impeding traffic/accident for which he admitted responsibility and paid a $150 fine, including $40 in costs, on May 23 at the court.

But this Friday Reaume was caught stealing campaign signs. Not his opponent’s signs, but his Treasurer’s opponent, Rita White, a Democrat who just happens to be a criminal attorney in Plymouth.

After watching Reaume pluck White’s signs and throw them in a dumpster an off-duty police officer recorded the incident and called White.

Township clerk, Joe Bridgman, recently fielded questions about the placement of campaign signs at a recent township board meeting when the candidate for Supervisor, Richard Sharland, an Independent,  asked if it was OK to place signs on right-of-way property and what was the policy for signs this election.

Bridgman referred the question to Reaume who looked to Treasurer Ron Edwards for direction. Edwards said they “weren’t enforcing any sign laws for this election.” Edwards admitted his own signs were all over the Township, including right-of-ways, and stated he wasn’t going to move them.

White called Bridgman after the report from the policeman and Reaume met her at the scene and jumped in the dumpster to retrieve and replace her signs.

“I am so sorry,” Reaume told White. I’ve never done anything like this before.”

Stealing campaign signs is against the law.

Surveillance cameras caught a Brownstown Township Trustee as he stole someone else’s election signs from a gas station this August. When 7 Action News showed him the video he admitted what he did.

It’s unknown if White will pursue a formal complaint against Reaume, but said she scolded him. “Being a government official he should know better, besides, I am not running for Supervisor, I am running for Treasurer,” White said.

Fortunately, the policeman wasn’t employed by Plymouth Township, Reaume or Edwards, or he might not have a job tomorrow.

We’re waiting to hear what 7 Action News says about this latest fumble by candidate Reaume.

Video by permission of Rita White.