“I call for a moratorium on newsletter until after the election.” 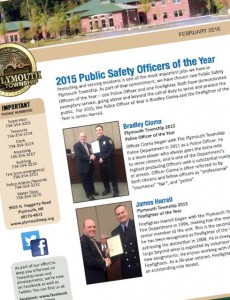 Police Chief Tom Tiderington was forced to step between Price and Trustee Bob Doroshewitz to prevent the exchange of physical blows as the heated argument escalated immediately following the adjournment of the meeting, according to witnesses.

During the meeting, Doroshewitz had characterized the most recent township newsletter as a “nine-page infomercial” and strongly questioned the propriety of a note on township letterhead left by Price as he went door-to-door in township neighborhoods. He went on to criticize Price campaign signs posted at several polling places during the presidential primary election March 8, mentioning one installed outside Northridge Church, where he worships.

Price maintained during his comments that the board members had the opportunity to suggest changes to the newsletter prior to the printing. He accused Doroshewitz of “playing politics” at the meeting.

Doroshewitz said the copy of the newsletter he received was incomplete and that Price’s campaign antics “cheapened the community.”

“In my view, it is shadow campaigning and if you were on the other side of the table you would certainly say it was inappropriate, Doroshewitz told Price. He implied that Price was using township taxpayers’ funds to further his campaign efforts.

He said the newsletter page dedicated to a message from Treasurer Ron Edwards had “nothing to do with the treasurer’s office and was pure campaigning.”

“I call for a moratorium on newsletters until after the election,” Doroshewitz said repeatedly.

Price cautioned Doroshewitz that he was “walking a very thin line” several times as the trustee continued to speak.

Apparently, Doroshewitz was reiterating complaints heard at township hall last week from voters who called to complain about the signs supporting Price at polling places.

Price was appointed to the supervisor’s position last year and has yet to declare his candidacy for the office which will be on the August primary.

Several individuals said Ordinance Enforcement Ofc. Kathy Pumphrey told them she had spoken with township treasurer Ron Edwards who told her Price was within his rights as the signs didn’t read “Vote” or “Elect” and were “Informational only.”

Price responded to Doroshewitz’ comments noting that the newsletter also promoted both the police officer and firefighter of the year and other community news.

“You could have done that in two pages,” Doroshewitz said.

As the board meeting adjourned, Price, obviously upset, abruptly interrupted a conversation between Doroshewitz and a reporter as the pair stood in the audience area. Witnesses said Price was shouting and used graphic expletives. He invaded Doroshewitz’ personal space, witnesses said, forcing the trustee to back up several steps, prompting Doroshewitz to tell the supervisor to “back off ” repeatedly.

Tiderington, alerted by the loud voices and alarmed audience members, approached the pair and stepped between them.

He escorted the two into a back room and said later that if “a punch had been thrown” he would “certainly have made an arrest.”

Doroshewitz said that he did not feel threatened because the police chief was on hand but had the altercation occurred elsewhere, he would have had concerns for his safety.

Kurt L. Heise, the current state representative from the 20th District, has already formally declared his candidacy for the supervisor’s position.

He said in a prepared statement that Price’s misconduct should result in censure by the board as soon as possible.

“In my 25 years in local, county, and state government, I have never seen the CEO of a municipality engage in such obscene and thuggish behavior toward another elected official,” he said.

“Price clearly lacks the temperament and maturity for this important job, and has brought more shame and embarrassment to the Plymouth community.”