Since I started studying at the University of Michigan, I have become more and more familiar with Washtenaw County’s primarily rural character: its winding gravel roads, bucolic red farmhouses and wide-open spaces. Just beyond Ann Arbor’s city limits in almost every direction lies a spectacular expanse of greenery, mimicking the rural escapes of Northern Michigan.

Last Saturday, I had a few spare hours and decided to take a drive out into the countryside only a few minutes from Central Campus. Traveling down two-lane country roads just outside of Ann Arbor always puts me at peace, and against a vivid backdrop of leaves ablaze with the flames of autumn, the scenes that whizzed by outside were striking.

There was one point that afternoon, however, that brought me crashing back to reality. I was driving down a road in Salem Township; the sun was just starting to dip toward the horizon, and the leaves were tinged with brilliant streaks of crimson and orange when a rectangular for sale sign advertising new home sites caught my eye. This sign signaled that new houses would invade at any moment and topple the idyllic landscape — and I realized when I saw it that the scene was fleeting.

Salem Township is a small, rural community in northeastern Washtenaw County with a population of about 6,000 people. Salem is roughly 10 miles from downtown Ann Arbor and is characterized by its country-like atmosphere, farmland and open space. Together with its neighbor to the south, Superior Township, Salem serves as a narrow buffer between the built-up urbanization of Metro Detroit — including Wayne County communities like Canton and Plymouth — and the splendor of Ann Arbor we have come to love.

For decades, even as far-flung locations in Metro Detroit have experienced dramatic waves of urban sprawl, Washtenaw County has largely retained its identity as a distinct community. Even just a half mile west of the border with Wayne County, Washtenaw has held on to its beautiful and scenic landscape.

This, however, could all change as Washtenawas Washtenaw braces for a new wave of sprawl that, this time, might be powerful enough to encroach beyond the boundaries of Metro Detroit. Schostak Brothers and Company, a developer based in Livonia, has plans to develop hundreds of acres of rural countryside in Salem Township centered near Michigan Highway 14’s interchange with Gotfredson Road. If these plans are put into action, this single project alone could lead to a 25% jump in Salem’s population.

Since then, the project has gotten tangled up in legal battles over zoning as nearby residents push back against the development. (This multi-use plan has also been scrutinized over the origins of a questionable Michigan Economic Development Corporation grant to help the project get off the ground.)

More recently, the project — dubbed “Salem Springs” — has stalled as Schostak struggles to find a way to connect the land to the sewer system. The developer is currently fighting a court battle over running a sewer line south to the Ypsilanti Community Utilities Authority through Superior Township; Superior is (rightly) blocking the construction of this line through its agricultural district, as a sewer could set off a new wave of sprawl within its own community.

Maybe the court will rule against this project, and maybe the land will be spared. Maybe I’ll be able to drive down the same two-lane country road next fall, and maybe I’ll find solace in the brilliant shades of autumn again.

Sadly, I know the odds this would happen are decent at best. Development is sometimes just impossible to defeat. And even if somehow Schostak’s plans are derailed, it will only be so long until the next developer proposes to raze a slice of Washtenaw’s scenic wilderness.

These are depressing thoughts, and they should be. Urban sprawl is a truly destructive force that has destroyed communities across the country. Once it comes to Washtenaw County, it will be unstoppable if we don’t take a stand now. Our precious natural resources and open spaces are fragile and limited, and development will wipe them away. Forever.

Some might dismiss sprawl like Salem Springs as unrelated to the environmentally-conscious community of Ann Arbor that we have come to love, but this simply isn’t true. Regardless of how far our community may feel from Metro Detroit, the eastern border of Ann Arbor is less than seven miles from Wayne County. A mere seven miles is very little land for urban sprawl to cover, and once developers get it started, development could spread toward Ann Arbor like an uncontained wildfire.

This spells major trouble for Ann Arbor and its unique community identity, both as a cultural center and as the home of the University of Michigan. One day, commuters could drive between Detroit and Ann Arbor with no apparent change to the landscape — just subdivision after subdivision — to the point that our city could geographically exist as a large suburb of Metro Detroit. It might seem inconceivable today while there is so much greenery nearby to enjoy, but developers have been known to convert open fields into mazes of curving streets, cul-de-sacs and parking lots remarkably quickly.

More importantly, sprawl is one of the most hostile enemies of the environment. In the age of climate change, urban sprawl dramatically increases our community’s dependence on gas-powered vehicles for transportation. Massive trends of sprawl also eliminate large tracts of greenery, removing carbon-sequestering trees from the landscape and destroying plant and animal habitats. Finally, urban sprawl claims land that has previously been used for farming in the past. In Ann Arbor in particular, we are quite fortunate to be in such close proximity to so many successful farm operations that provide locally-sourced and organic produce. But these too could be lost to urban sprawl if we turn a blind eye to Washtenaw’s growing fight against these development pressures.

There is reason for hope. Ann Arbor and Washtenaw County are lucky to be home to a community that cares so deeply about protecting our green spaces. For nearly two decades, the city of Ann Arbor has operated its innovative Greenbelt Program, an effort that aims to protect natural resources, farmland and open space in eight surrounding townships, including Salem and Superior Townships. This program has already permanently protected more than 6,100 acres of land, with new landowners applying to join the city’s greenbelt every year.

In addition to the Greenbelt Program, which is one of the most prominent land preservation initiatives in the community, many other entities have committed to defending our green spaces.Washtenaw County leads a Natural Areas Preservation Program, and many other organizations like the Legacy Land Conservancy and Superior Greenway lead similar efforts. Moreover, a number of communities, Superior Township in particular, have implemented strict measures to protect their green space and agricultural districts.

In the end, it is perfectly appropriate for a community like Washtenaw County, with a thriving economic landscape, to be the site of some development. But it is crucial that development is both economically and environmentally responsible, as well as minimal. Enormous, disconnected projects like Salem Springs are irresponsible and will lead to an explosion in development and sprawl across our community.

County officials, township governments and city leaders must work together immediately to form a comprehensive plan aimed at protecting Washtenaw’s invaluable natural spaces. It’s not too late. This is our community, and our green spaces, to defend.

Mr. Stern is a columnist who regularly writes for The Michigan Daily –  a publication edited and managed by the students at the University of Michigan. The views and opinions expressed here are those of the author and do not necessarily represent the opinions, beliefs or position of the PlymouthVoice.com.

Trick or Treating is a mixed bag this year 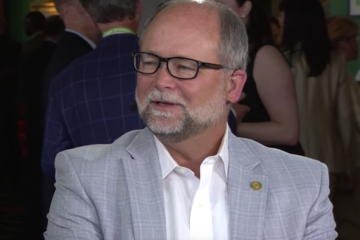