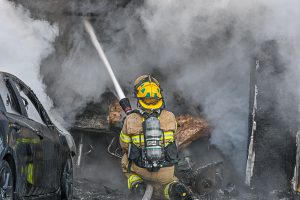 Plymouth Township Fire Chief, Dan Phillips said a fire in the detached garage of a Brownell St. home was fully engaged and flames were shooting-out several feet from the front of the building when his first fire-engine company arrived last Thursday, around 4:30 p.m.

According to Phillips, the fire had a good start before it was noticed. He said there were no injuries and the fire has been ruled accidental after investigators determined fireplace embers ignited the blaze after the home-owner cleaned the fireplace. Firefighters from Plymouth-Northville, and Canton departments responded to the box alarm, providing mutual aid to the Township fire department. A total of 14 firefighters were on scene in minutes.

NFPA says in order to remove hot fireplace ash you must have the right tools. Using a fire- resistant metal ash shovel, scoop up the old ash, then place into a fire-resistant metal can with a tight fitting lid, dispose outside on a non-combustible surface like stone or brick, away from any structures for a week before putting them in the trash.