Johnson Creek at Fish Hatchery Park is getting a nearly million-dollar makeover that will transform the park, improving both fish habitat and visitor experience, as well as bolstering water quality within the Rouge River watershed.

Construction crews from Anglin Civil, LLC, of Livonia, recently began tearing out the overgrowth that will expose the now-hidden Johnson Creek and allow easier access to the crumbling wall that runs the length of Johnson Creek. They will replace the wall with a natural earthen berm and dredge Fish Hatchery Pond, two key steps to improve fish passage between the pond and creek and to create a more hospitable fish and wildlife habitat.

The view will change, too, said Mark Gasche, Northville Parks and Recreation Director. Park visitors will notice new greenery as the full length of the riverbank’s 1,050 feet will be exposed as the project advances. The creek’s bank will have tiered levels populated by more than 250 native trees and 300 native shrubs. Next spring, visitors will be allowed to go to the creek’s edge, which was impossible before.

“The esthetic will change and visitors will notice a better looking riverbank,” Gasche said.

The park has historical significance as one of the largest fish hatcheries in the United States and is one of only three cold-water creeks in southeast Michigan that support a trout population. The only public access point to Johnson Creek is Fish Hatchery Park.

The project is funded by a $963,090 grant from the U.S. Environmental Protection Agency and administered by the Alliance of Rouge Communities (ARC), a group of local municipalities, counties and other institutions, which work to improve water quality of the Rouge River watershed. The Rouge River feeds into the Detroit River, which supplies the area’s drinking water.

The ARC chose this project because the fish and wildlife habitat associated with Johnson Creek have been lost and impacted by several factors, including sediment-laden stormwater runoff from the gravel parking lot. Not only have the sediment deposits in the pond changed its depth, where it is less than 18 inches deep, but it also blocks the fish passage channel between the pond and the creek, where it settles, impacting the habitat in the creek as well.

The project will repair this blockage and install a bioswale, a shallow depression that stunts runoff and removes debris and pollution, Gasche explained.

The crew also plans to remove 2,000 cubic yards of sediment in the pond to create deeper water for fish.

“Johnson Creek is an irreplaceable natural resource and amenity for our community,” said Northville Township Supervisor Robert Nix. “This project will restore the creek banks, prevent erosion and enhance the waterway for fish. It is our great partnership with the City and ARC that made this project possible.”

Environmental Consulting & Technology, Inc. of Ann Arbor, with engineering support from Soil Materials and Engineers (SME) of Plymouth, designed the project. SME devised the wall replacement that separates the pond from the creek. The natural earthen berm supported by sheet metal pilings driven into the ground will serve the same function as the concrete wall.

The park, including the tennis courts, will remain open during construction but the baseball fields and pavilion are closed.

Construction is expected to last through late October pending any weather delays.

“It’s an exciting project for Northville Township and its residents, and we are grateful Johnson Creek benefitted from this grant,” Gasche said. 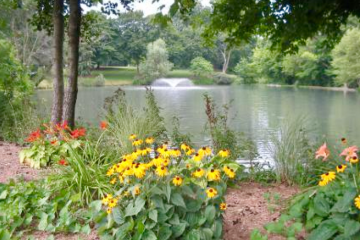