The first phase of the long-awaited Ford Road boulevard project is scheduled to begin next year according to Michigan Department of Transportation Project Manager Adam Penzenstadler.

The state official spoke via Zoom to the members of the Canton Township Board of Trustees last week during their regular meeting. He said work on the project, which will replace the center passing lane on Ford Road from Lotz to Sheldon roads, will actually begin on Haggerty Road next year with work expected on Ford Road in 2023. He cited traffic studies which concluded that boulevards on five-lane roads significantly reduce vehicle crashes which are regular incidents on Ford Road. Penzenstadler said the high volume of traffic on Haggerty Road near the Ford Road intersection has necessitated a boulevard installation at that location, too.

He added that Ford Road will be widened and that rights of way along the roads will be necessary, although he said it was too early to discuss details of those acquisitions from affected areas. Planning is about 60 percent complete, he said, and should be finished this September. He cautioned, however, that there was “no guarantee that things won’t change.”

The township is paying $1 million annually on the project generated by approval of a road improvement millage by voters in 2018.

Penzenstadler cautioned that the acquisitions of rights of way can be challenging and that state engineers will attempt to minimize the need to purchase property during the ongoing design phase. He said the state would only acquire property absolutely necessary to the roadway construction. He added that bidding on the work could begin at the end of this year.  That work will include the replacement of drainage pipes along the affected route along with the replacement of existing traffic signals and sidewalks.

Prior to the onset of construction, MDOT officials will host virtual public informational meetings while a website is being developed to provide updates and detail of the project. No dates for the meetings have been finalized, Penzenstadler explained. 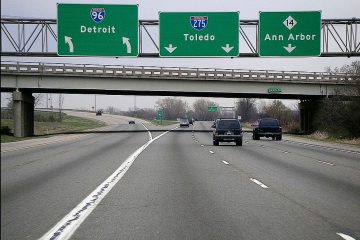