Drivers hoping for the much-needed traffic improvements along Ford Road in Canton Township will continue to wait as the start date for the project is now estimated as 2021 or 2022.

The 2.5 mile boulevard will separate east and westbound traffic on Ford Road and eliminate the current left-turn lane, a change designed to improve safety along the stretch of roadway that Township Supervisor Pat Williams has called “one of the most-dangerous roads in southeastern Michigan.”

Canton Township officials met with representatives from the Michigan Department of Transportation, (MDOT) last month in an effort to determine the timeline for the project.

Williams said the design phase of the boulevard is scheduled to be complete this year while actual construction won’t begin for another year, or possibly two.

Following the design phase, officials said, the state will begin to acquire property along the affected area of Ford Road to accommodate the widening on both the north and sound sides.

Officials denied claims that construction would close the road to one lane for more than a year and said that contingency plans to move traffic through the area smoothly would be a consideration in the construction planning and schedule. To that end, state officials said that a communication plan to keep businesses and local government informed of the plans would be in place and include public meetings throughout the process along with flyers, email blasts and social media along with websites to assist in communication with residents.

Williams said the project would certainly cause some inconvenience for motorists but that the issue is one of safety.

“Like any project of this size, there is going to be some inconvenience for drivers … there’s no getting around it,” Williams said.

“But something has to be done to increase the safety on Ford Road.”

Traffic signals along Ford Road will be re-timed, state officials said, to accommodate traffic during construction and assured representatives from the Canton Downtown Development Authority that plans would consider the impact on the aesthetics along the affected area, including the public art along Ford Road, MDOT representatives said. 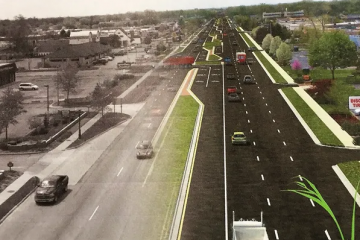