As has become a tradition, Independence Day parades and celebrations are planned throughout the area.

In Plymouth, a special celebration is planned this year as the 150th anniversary of the city is celebrated.

There is an old-fashioned ice cream social planned, along with the traditional 4th of July parade this year.

Officials from both the city and township will march together in the parade this year which usually begins at Theodore Street where the staging area is located and then continues down Main Street, ending at Hartsough. The parade will end with an old-fashioned ice cream social in Kellogg Park which is expected to begin at about 10:30 a.m.

Officials from both municipalities have noted that this is a show of unity between the two bodies and a tangible example of a new spirit of cooperation and a desire to once again work together.

As usual, the parade will begin at 9 a.m. and include some of the traditional attractions, including members of the Plymouth Fife and Drum Corps.

In addition, the week leading up to the parade is also packed with attractions, all marking the upcoming anniversary of the founding of the city.

A concert is planned tonight at 7:30 in Kellogg Park with the Plymouth Community Band performing music of the past 150 years.

Tomorrow night at 7, Steve King and the Dittilies will perform in Kellogg Park during the Music in the Air series.

The Michigan Philharmonic will perform an All American Salute at 7 p.m. Saturday, July 1 in Kellogg Park.

In addition to the entertainment in Kellogg Park, a 3-mile run and walk is set to begin at 9 a.m. July 2 in Old Village and travel through the streets of Plymouth to Liberty Street where there will be games and other activities. The run is sponsored by the Downtown Development Authority.

Each participant will receive a commemorative t-shirt, celebrating the run, organizers said. Sign up is still available at http://www.downtownplymouth.org and scrolling down to find the Plymouth 150th page.

Movie buffs can enjoy Yankee Doodle Dandy for free at 4:15 and 7 p.m. at the Penn Theatre Sunday, July 2 at no charge and The Secret Life of Pets will be shown in Kellogg Park at dusk July 3. This, too, is a free event.

In Northville, the annual 4th of July Parade which has been organized by the Northville Community Foundation for 19 years, will step off from the Northville Downs parking lot at Sheldon Road and Seven Mile at 10 a.m.

The theme this year is All Star Salute to the U.S.A. and the event which usually draws more than 20,000 viewers along the route will include the usual clowns, dancers, floats, veterans, antique cars and lots of music. The parade will travel to the corner of Griswold and Main Street and continue down Main to Rogers and then turn onto Cady. The marchers will travel down Cady to Wing and then march down Fairbrook Street to Center where the marchers and floats will disperse.

As always, the bike parade of decorated cycles is planned with the winners each receiving a $50 gift certificate from the sponsor, Northville Meijer. There is no entry fee or application, the children simply show up with their decorated bikes, ready to march.

As has become a tradition in Northville, the parade is sponsored by St. Mary Mercy Hospital.

Organizers suggest getting an early spot to view the event as there is always a large, patriotically-dressed and enthusiastic crowd at one of the most popular events throughout the area.

A complete parade line up for the Northville parade is included as a special insert in this weeks edition of The Eagle. 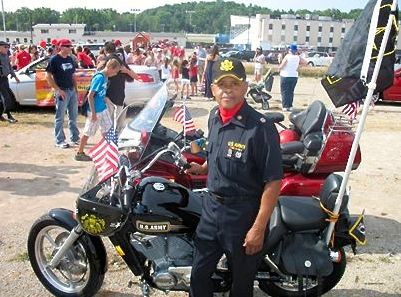