A developer has acquired the historic Ford factory in Plymouth Township and the surrounding 5.15 acres with plans to revitalize the 96-year-old building, known as the Phoenix Mill, into restaurant and retail space. 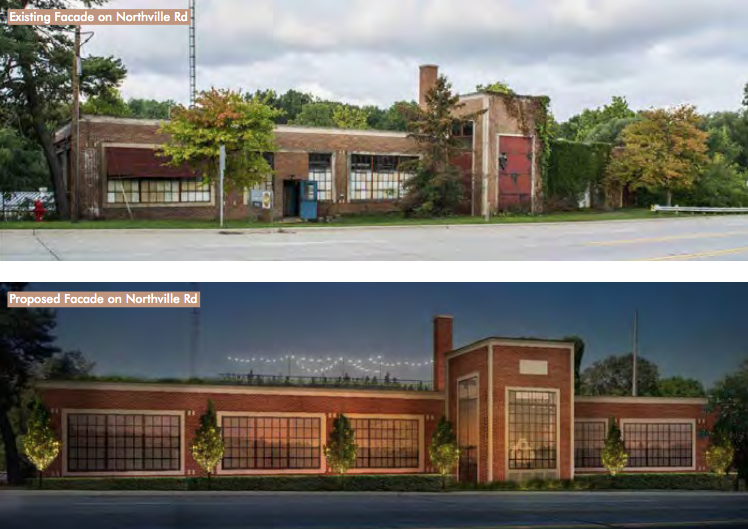 The sale price of the property was $605,000 and was part of a Wayne County Economic Development plan.

The two-story brick veneer structure situated on Hines Parkway across from Phoenix Lake was at one time used as a Ford Motor Co. parts factory and is one of the original 19 Village Industry buildings Henry Ford built along the Rouge River.

Designed by renowned industrial architect Albert Kahn, the property was acquired by Ford in 1919. The decrepit and deteriorating plant is the only structure remaining in the community from the 19th-century Village of Phoenix. The building has been vacant and neglected for decades, according to officials. The last tenant was the Wayne County Department of Public Services, which relocated yard operations to Livonia in 2007.

The property faces Phoenix Lake and is on a triangle just north of Five Mile Road bordered on the west by Edward Hines Drive and on the south by M-14 Expressway. A tributary of the middle Rouge River runs northwest through the acreage.

Donofrio is a mechanical engineer with automotive experience. Cox, also a mechanical engineer and performance car enthusiast, along with his wife Diane Cox, purchased the former Henry Ford Northville Valve plant on Northville Road in 1994, and donated the surrounding 9 acres of land to the City of Northville to be used for parks and recreation. The team has worked together on that Water Wheel restoration project for the past 20 years along with other commercial real estate Brownfield restoration projects.

The developers, who plan to restore the building with a focus on restaurant and retail space, have entered into an exclusive agreement with restaurateurs Michelle and John Lussier of Northville (Table 5, and Lucy & The Wolf) to build out the first-floor level of the building keeping with the unique history of the old plant.

The ground floor level is set for an event and banquet venue to be operated by Andy Genitti of Northville. Genitti, of the Genitti family, is one of the owners and operators Genitti’s Hole in the Wall in downtown Northville.

This month Donofrio and Cox presented their preliminary plans to the Plymouth Township Board of Trustees and Planning Commission.

The developers said in addition to the restoration and rehabilitation of the Phoenix Mill building, the project would include an improved streetscape and signage, a garden/parking area with flowerbeds, bicycle parking and walking- biking trails. Township Trustee Jack Dempsey who is also executive director of Heritage Michigan, a non-profit organization dedicated to monitoring and protecting the state heritage, said he was pleased about the Phoenix project as were the members of the Plymouth Preservation Network.

“It’s an important piece of Plymouth’s heritage and beyond that, American Heritage. This is where women earned equal pay for equal work, decades ago. It’s a component of American democracy,” he said.

The former Ford plant, constructed in 1922, played a significant role in the American war effort during World War II, according to historical records. Ford managers hired only single or widowed women to work at the plant and paid them an unheard of at the time $5 per day. The women workers built electrical parts such as voltage meters, light switches and generator cutouts for Ford automobiles. During World War II in the 1940s the plant produced electrical wiring for M-7 machine gun directors and electrical parts for Universal Gun Carriers. With increased wartime work, the operation was transferred to the Willow Run Bomber Plant and the women became the first “Rosie the Riveters.”

“It’s awesome to see how much our community values restoration and re-pur- posing of historic buildings for productive use.”

Officials said they are open to re-zoning to an appropriate and necessary classification as the building is now zoned public land.

Millage to be topic

Queen of the Blues to perform