Former prosecutor and hospital executive-candidate Mike Duggan made history in Detroit’s mayoral primary in 2013 when he received 46 percent of the primary vote as a write-in candidate.

Duggan’s name had been removed from the ballot by the courts after a challenge to his city residency was filed by one of his political opponents. He faced overwhelming odds when he made the decision to run a write-in campaign for the mayoral office.  His critics and political consultants said the damage to Duggan’s campaign by the court challenge was too much to overcome but supporters and 50 volunteers banded together and launched a “how-to write-in” campaign.

Duggan and his team pushed ahead with the write-in effort winning a plurality primary beating Wayne County Sheriff Benny Napoleon. Duggan then took 55% of the vote in the November general election.

“You’ve got to take away from your basic message and you’ve got to spend a lot of time explaining the process…That’s a very challenging thing to do,” Duggan said.

That’s exactly what Plymouth Township Supervisor candidate Kurt Heise and Trustee candidate Don Schnettler are now attempting to do while facing the same odds after a three-panel appeals court reversed the decision of a Wayne County Circuit Court judge and removed the names of the two Plymouth Township candidates from the ballot. That decision came following a court appeal by attorneys for Carl Berry, a local political activist and avowed supporter of incumbent Supervisor Shannon Price. Berry filed the original lawsuit seeking to have the two names removed after they neglected to enter their precinct number on their Affidavit of Identity forms.

Like Duggan, the two candidates have requested that Michigan Secretary of State Ruth Johnson intervene and send representatives to oversee and administer the township election.  Currently, the pair has the help of scores of volunteers who are assisting with door-to-door canvasing, sending post cards, hosting neighborhood get-togethers and citizens’ meetings.  They are hoping to keep the public informed of their stands on issues and policies and also show voters the simple steps necessary to cast their ballots for write-in candidates.

Heise says it’s as simple as 1, 2, 3 and offered ballot instructions on his website: 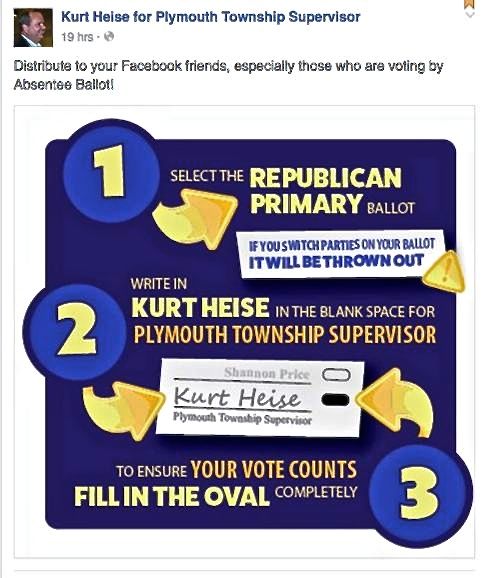