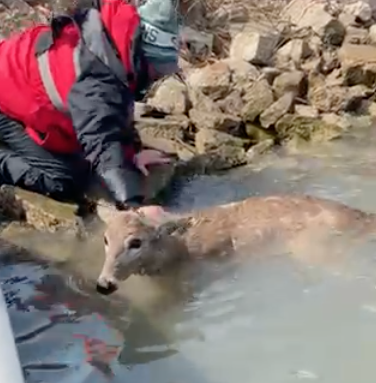 While walleye fishing in the Detroit River they encountered what they at first thought was a log. As Kafila motored closer it became apparent that the “log with two eyes” was a yearling doe struggling for her life in the frigid 39-degree waters off of Horse Island.

Horse Island is a small peninsular island in the downriver area of the Detroit River, south of Gibraltar, a mile west of the southern tip of Grosse Ile. 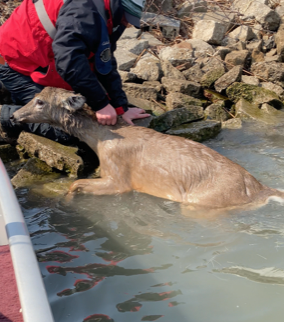 After starting their day at sun-up, Kalila and Rauser, who love to fish for Walleye at what they claim is one of the best spots for miles around, had finished lunch and were ready to turn back in their 17 foot rig about noontime when they spotted the deer.

“Oh my God- It’s a deer.” Kafila yelled to Rauser.

“She was being pulled downriver by the wind and current toward Lake Erie in a rough three-foot chop.”

Kafila, at the controls, said the doe was near death went under two or three times before they could manipulate the boat to get her along side when she surfaced.

Holding the deer close to the boat while keeping her head above water they motored slowly to the nearest shore, a distance of about a mile. 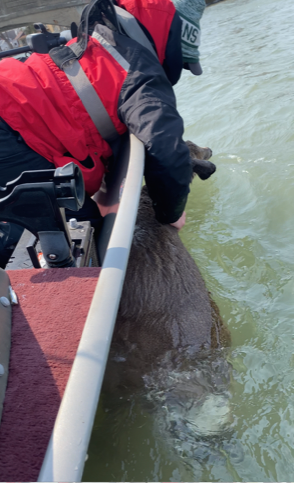 “There was nothing to tie up to…When we got to shore there was just a seawall.” Kafila continued.

Coincidentally, two men were crossing the bridge near the seawall about the time they were close and were able to lend a hand in bringing the limp animal to the shore where she laid still for over 30 minutes before she moved.

This is one fishing trip the two fishermen of 25 years will never forget.